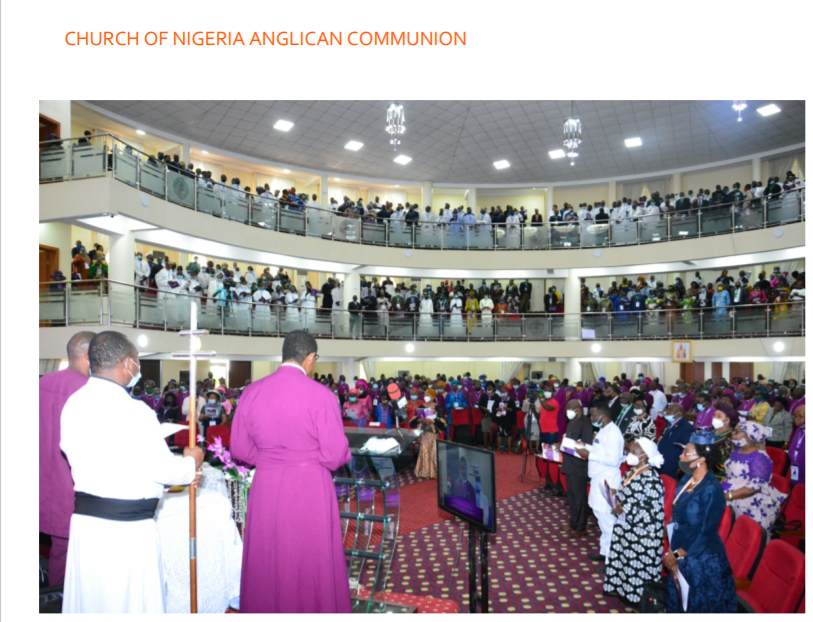 The 13th General Synod of the Church of Nigeria (Anglican Communion) held from September 21 to 25, 2020 at the Church’s National Secretariat (St Matthias House) Gudu District, Abuja.

The Primate of All Nigeria and Bishop of Abuja, the Most Rev’d Henry Ndukuba, who hosted and presided over the Synod, said the Church of Nigeria has mapped out its missions and evangelism vision and is re-strategizing to reach out to rural, urban and the international community for bringing more people to salvation through Jesus Christ.

The Primate also outlined projects and proposals for his tenure, among which was the building of a University of Technology to be sited at Kwaita. Abuja. He said the site, which has been made available already, is currently being fenced. The University, when completed, will serve the Church’s vision of developing manpower and skills for the country, as a part of the vision of Bishop Samuel Ajayi Crowther, who had not only established the church but also developed the people and the congregation.

The leader of the Church of Nigeria also addressed some current issues in the nation. On CAMA law, he said:

It is necessary for us to make a clear statement concerning the controversial new power conferred on the Corporate Affairs Commission by S.839 of the amended CAMA 2020 (the Act) to obtain an order of Court, to suspend the Trustees of any religious, charitable and non for proﬁt association in Nigeria, and appoint an interim manager or managers to manage their affairs. This merits some comment as it directly affects CON (Anglican Communion) as such an association, and its 163 Dioceses whose assets are vested in its Trustees for the time being.

Even though the Court Order to suspend Trustees is to be obtained ‘upon the hearing of the petition,’ it ought to have been categorically stated in the Act that the Commission or a minority of members cannot exercise the power unilaterally through an ex parte Court Order.

We also call on the Nigerian Judiciary to be vigilant in the adjudication of matters pertaining to the application of sections 839, especially as it affects Religious organizations in particular, pending the review of the relevant provisions of the Act, as is urgently being called for.

The Church of Nigeria supports the desire to ensure probity in all incorporated and non-incorporated bodies in Nigeria, including non-proﬁt associations which include churches, through the implementation of the Act, the relevant provisions of which incidentally are identical to sections of the UK Charities Act 2011. The Church of Nigeria has consistently spoken out about the corruption that has become endemic in our nation and the need to root it out wherever it rears its cancerous head.

There is admittedly a need for the Trustees of the Churches to promote good and honest corporate governance within the Churches through transparent accountability in the management of its affairs, given reported instances of abuses. However, on account of the peculiarities of the Church as a faith institution, the almost unlimited power and discretion purportedly conferred on the Commission or on the stipulated one ﬁfth of the [members of] the “association” (i.e. the Church) to determine the scope and application of these new powers is clearly subject to mischief and abuse. The law as it stands enables the Commission to unilaterally obtain an Order of Court to suspend Trustees of a Church and appoint “any person” as interim manager or managers, without a guaranteed prior fair hearing of the Church in response to any claim or allegation by the Commission or such minority of members.

The General Synod of the Church of Nigeria is the legislative and highest ruling body of the Church and holds once in three years, with all the bishops and delegated clergy and laity from all the Anglican dioceses in Nigeria as members. New officials of the Church were elected/appointed, new Vision approved, new bishops consecrated, new Archbishop presented and the Church’s Constitution amended at the just concluded General Synod. The Synod, which was the first to be presided over by the Most Rev. Henry Ndukuba as the Primate of the Church of Nigeria, launched the Church to a new decade, tagged, Decade of Reign of God. It featured worships, Bible studies, paper presentations, review, and discussion of church reports and issues. A communique was released at the end of the meeting.