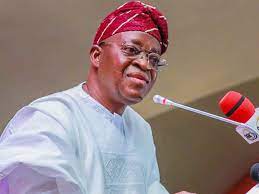 Oyetola, Governor Of Osun State
Share
Facebook Twitter LinkedIn Pinterest Email WhatsApp
The Governor of the State of Osun, Adegboyega Oyetola, has made it compulsory for all the public and civil servants to wear Adire to work every Thursday.

The governor, who launched mass production, promotion and marketing of Adire Osun, also declared every Thursday of the week ‘Adire Osun Day’.

Oyetola said Adire is indigenous to Osun and that it is not for nothing that Osogbo, the State capital, is referred to as ‘Ilu Aro’ (Home of dye). He explained that the initiative was to reawaken the people’s consciousness towards socio-cultural and artistic renaissance in the State.

Oyetola who was represented by the Secretary to the State Government, Prince Wole Oyebamiji, stressed that the State under his watch would continue to support the cause of employing indigenous resources to grow her revenue base.

Oyetola said, “I wish to recall that at the inauguration of this administration under my leadership, I did state that the economy of our State should be repositioned and that Economic Summit would be organised to, among other initiatives, develop strategies that would drive meaningful youth employment, enhance food security and agricultural development, activate mining prospects and boost the tourism potential of the State.

“You will also recall that I stated in my inauguration speech that the Medium and Small-Scale Enterprises would be strengthened to enhance their productive capacity so as to generate jobs, create wealth and further boost our local economy.

“I also promised that the State of Osun would be made a cultural destination and tourism enterprise zone in the South West.

“It is in line with the above Vision that the Government has swung into action by harnessing all the various tourism resources that the State is greatly endowed with.

“Due to the various commitments of the State Government, the Federal Government and other Private and Public Development Partners are collaborating with the State for the provision of infrastructure and the upgrade of our cultural and tourism sites to global standards.”

Oyetola announced that “it has become compulsory henceforth, for all the Public and Civil Servants to wear Adire same day as part of efforts to quicken the actualisation of the set objectives of the initiative as Osun remains the leading light in African culture and tradition in the country”.

He also urged the residents to take advantage of the opportunities offered by the initiative to draw economic opportunities and benefits to themselves for huge economic development.

“In furtherance of efforts of this Government to preserve and promote the production of Adire Osun as well as bolster the image of Osun as a culturally correct and indigenous product inclined State, every Thursday has been declared Adire Osun Day. Consequently, effective from August 27th, 2021, all Public and Civil Servants in the State shall wear Adire to work”, he added.