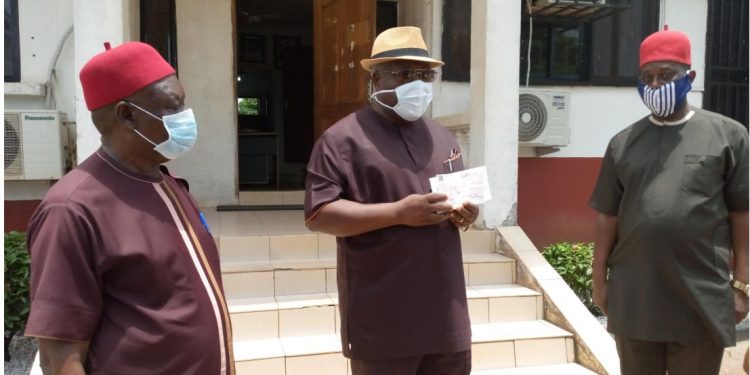 Ohaneze Ndigbo, Anambra state chapter has donated the sum of N200,000 to the state government as part of its support to the fight against the Coronavirus pandemic spread in the state.

The President, Chief Damian Okeke-Ogene, who disclosed this yesterday while making the donation at the Government house, Awka, also said the group also provided its bus to assist in conveying materials needed for the fight from one point of the state to another.

He said the gesture was to express satisfaction with the proactive measures the government had tackled the scourge which he said had contributed to the near-absence of the disease in the state.

He said, “We’re here to make our widow’s mite of N200,000 to the state government having seen the progress the state is making, especially the proactive measures of the governor.

“We also provided our bus for use. I personally decided to be the driver of the bus any time there’s need to convey materials to show how committed Ohaneze is to the fight.”

The Ohaneze boss further expressed satisfaction with the distribution of palliatives in the state, calling for more support from individuals and corporate organisations.

“Although the palliatives may not be enough, but the ones available have been reaching the people at the grassroots. The truth is that government alone cannot carry the load. They need to be assisted,” he added.

He also thanked the people for their calm disposition in the face of provocations, just as he appealed to the security agencies to be civil in handling the situation.

“90 percent of the people are hungry, and when they are hungry, they are angry, and can explode at any slighted provocations. But they need to obey the orders of the government and avoid any form of lawlessness,” he noted.

The Secretary to the State Government, Prof. Solo Chukwulobelu, in his response, thanked the Ohaneze Ndigbo helmsman for the gesture, assuring him of judicious use of the donations.