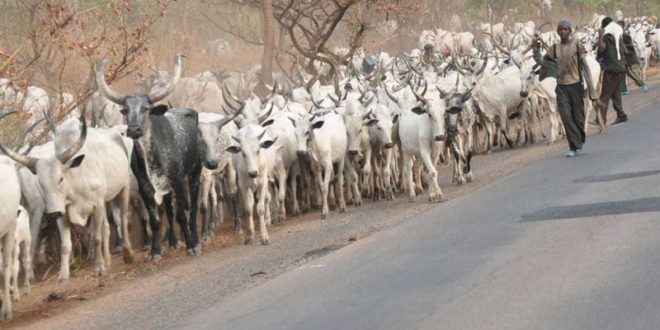 According to a press statement issued on Tuesday by the IPOB media and publicity secretary, Emma Powerful, any herder who remains in the region after the 14-day ultimatum must rear his cows in an enclosed ranch or face the music for flouting the law.

The Indigenous People of Biafra has warned Fulani herdsmen in the South-East region of the country to shun open grazing of cattle.

According to a press statement issued on Tuesday by the IPOB media and publicity secretary, Emma Powerful, any herder who remains in the region after the 14-day ultimatum must rear his cows in an enclosed ranch or face the music for flouting the law.

In a statement made available to SaharaReporters, Powerful commended the efforts of the South-East governors for banning open grazing in Igboland.

The South-East Governors had earlier declared that open grazing is prohibited in the region, following a 14-day ultimatum given to the Fulani herdsmen by IPOB leader, Nnamdi Kanu to stop open grazing or vacate the region.

“We the Indigenous Peoples of Biafra, IPOB, ably led by Mazi Nnamdi Kanu, wish to salute the courage of South-East governors for heeding our leader’s call to ban open grazing in the region.

“We received with delight the news of a statement credited to the Chairman of South-East Governors’ Forum, Dave Umahi, to the effect that open grazing has been banned in all states of the zone.

“IPOB wishes to acknowledge the wisdom of the governors to respect the people’s will for the first time. If the governors had not been seized by useless fear and trepidation over the Fulani before now, our region wouldn’t have been in this mess,” Powerful said.

He, therefore, sent a stern warning that the Eastern Security Network will start to enforce the law after the two-week deadline given.

“We therefore, want to aver, and assure the governors that our gallant Eastern Security Network, ESN, will ensure strict enforcement of the ban which is also in line with a subsisting but neglected judicial pronouncement in 1969.

“At the expiration of the two-week ultimatum already issued by our leader for open grazing to end in Biafra land, IPOB and ESN will move in to deal with any herder flouting the law.

“Since the law enforcement agents are too weak or have wittingly failed to enforce the ban, we can no longer afford to sit idly and watch the wanton destruction of lives and crops of our people.

“ESN will do the needful. We shall no longer allow law breakers to have a field day after inflicting physical and economic harm on innocent victims,” IPOB spokesman said.

He also pointed out how the North-West and North-East regions had been using Hisbah police to enforce Sharia law, destroying the businesses of people, said to be mostly Igbo, dealing in alcoholic beverages worth millions of naira.

“The 12 Northern Muslim States already have their Hisbah police enforcing their Sharia law yet they claim Nigeria is one. Alcoholic beverages worth millions of naira belonging to Biafrans doing their legitimate business in those states have been callously destroyed by these overzealous elements and nothing happened.

“Yet some wicked mortals masquerading as herders are daily openly grazing their cattle on our farms, kidnapping our folks for ransom, killing and raping our mothers and sisters. The security agents not only turn a blind eye to these unimaginable criminalities but sometimes provide cover for the perpetrators.

“We, therefore, wish to remind all herders in Biafra land that the era of occupying our forests and grazing on our farms is gone.

“They have to vacate our forests and relocate to cities where other human beings live. Wandering about with cows can no longer be tolerated on Biafra soil.

“Anyone interested in cattle rearing will either build a ranch as obtains in civilised societies or leave Biafra land. Do not say you are not warned!

“We advise all herdsmen in Biafra land irrespective of their tribe to restrict themselves to the law of the land or relocate to regions where open grazing is allowed. Our patience will elapse after the expiration date of the 14-day ultimatum by our leader.”