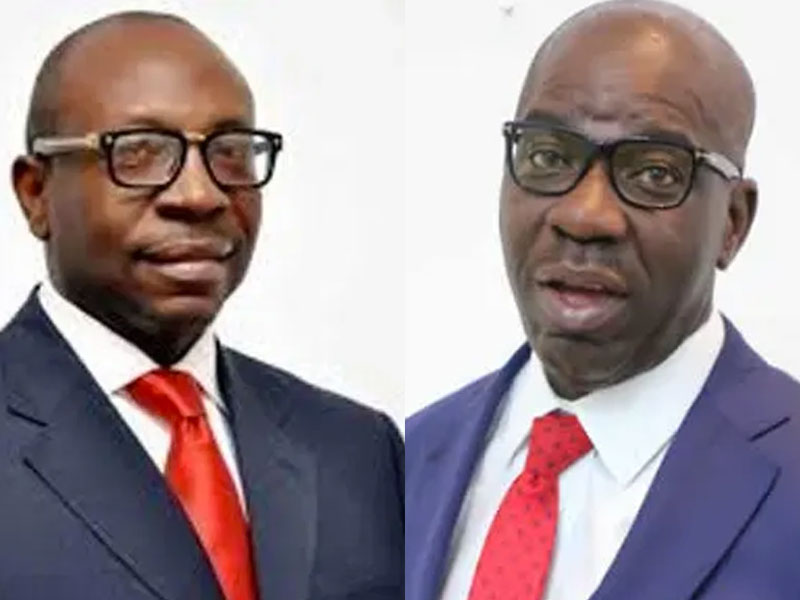 The battle line for the governorship ticket of the All Progressives Congress (APC) in the forthcoming election in Edo State was drawn yesterday as the two main contenders from the ruling party’s factions, the incumbent, Mr. Godwin Obaseki, and Mr. Osagie Ize-Iyamu, obtained nomination forms to run.

While a group, Obaseki Mandate Forum in Federal Capital Territory (FCT), purchased the nomination form for Obaseki ahead of the June 22 primary election, Ize-Iyamu, a former Secretary to Edo State Government, picked his at the party’s national headquarters in Abuja.

APC in Edo State has been enmeshed in a crisis since last year, which has defied all efforts of the party leaders and other well-wishers to resolve.

The crisis has resulted in the factionalisation of the ruling party in the state, with one faction pitching tent with the APC National Chairman, Mr. Adams Oshiomhole, and the other backing Obaseki.

However, amid controversy over the directive of APC National Working Committee (NWC) that direct primary would be used to decide the party’s standard bearer in the election, Ize-Iyamu, who had earlier been endorsed as the consensus candidate by Oshiomhole’s faction of the party, obtained his nomination form with an assurance that the election would not be lost to the opposition.

However, the governor, whose faction opposed the direct primary directive of the party, has vowed that no man could deny him a second term in office, adding that “power comes from God.”

Ize-Iyamu was accompanied to the national secretariat of the party in Abuja by other aspirants from Oshiomhole’s faction, including: Prof. Ebegue Amadasun, Gen. Charles Airhiavbere (rtd), Mr. Chris Ogiemwonyi, Hon. Ehiozuwa Agbonayinma and Hon. Saturday Uwuilekhue and others.

At the event, the national body of the party warned that the Peoples Democratic Party (PDP) is waiting for APC’s implosion ahead of the June 22 governorship primary in Edo State, but assured party members of a free, fair and credible primary.

Addressing journalists after picking his form, Ize-Iyamu said the other seven aspirants had stepped down for him, while Edo State members at the National Assembly were backing his aspiration.

He explained that the other aspirants stepped down for him because the party does not want a rancorous primary or anything that would give the opposition the opportunity to take over the state.

Ize-Iyamu said though there were issues in the state, the leaders of the party were resolute that the state would not be lost to the opposition.

“Every one of us here may have personal ambitions, but we are bound together by the common desire to fast-track the transformation of our state through transparent, effective and accountable governance that will improve the living standards and social well-being of our people.

“And we all recognise that this cannot happen unless we dislodge the present administration that has failed this great party and the people of Edo State,” he stated.

Ize-Iyamu said he was reluctant to criticise Obaseki, but added that even though APC is the ruling party in the state, majority of its members are not happy with the pace of development, rancour and the level of insecurity in the state.

Asked if Oshiomhole had endorsed him, he noted that while he would have loved the national chairman to endorse him, he (Oshiomhole) could not do that now in order not to compromise his integrity as the father of all the aspirants.

On the mode of the primary that is generating controversy, Ize-Iyamu said he had no problem with the method to be adopted by the national body of the party in picking its governorship candidate.

He said he would abide by the party’s rules as set by NWC, ‘’the organ that is empowered to fashion out guidelines’’ for the conduct of the primary.

Earlier, the National Organising Secretary of the party, Mr. Emma Ibediro, had said APC’s major opponent, PDP, was praying for an implosion in the party, adding that the opposition party “will wait forever and wait for nothing.’’

He said: “With the way we are going to conduct our primary, it will leave no one in doubt that APC is more united more than ever. Naturally, the social media has been awash with a lot of comments, but I want to assure you that contrary to what people may think, I am very optimistic that the forthcoming primary will prove APC as a party that will be fair to all.

“The processes that will lead to the primary will be so transparent that whoever wins will know that he has won and whoever loses, it will be obvious that he/she has lost. I urge all of you to see this contest as a game,” he stated.

Ogiemwonyi, who stepped down for Ize-Iyamu, said he shared the same commitment and vision for accelerated development of Edo State, anchored on purposeful and effective leadership with Ize-Iyamu leveraging on the abundant human and natural resources in the state.

No Man Can Stop My Re-election, Says Obaseki

Obaseki, however, expressed confidence yesterday that he would get a second term in office, adding that no man could stop him from returning as governor.

Obaseki, while featuring yesterday on Channels Television‘s Sunrise Daily, said: “I am not a violent person. But I am confident that the way I got into power is the same way I will return.

“God gave me power. If he wants me to return I will continue. No man can stop me. Power comes from God.”
Obaseki also denied claims that his ambition to return as governor would be hindered by inadequate “resources.”
“I have friends with resources. I worked for eight years behind the scene before I became governor.

“So, all that insinuations about using somebody’s resources…I became governor on the platform of the party and I am grateful for it.

“It does not matter whether it is direct or indirect (primary), I will win,” he stated.
He appealed for peace in the state, and cautioned against bloodshed over the election.

“This shouldn’t lead to bloodshed. We will not accept to be cowed and intimidated because some people think that they can manipulate rules and cut corners,” he said.

According to him, the state chapter of the party, which is responsible for superintending over the emergence of a candidate of APC, resides and operates in Edo State and not Abuja.

“It is, therefore, hilarious to hear that a so-called consensus candidate for the party in Edo State governorship election was selected in Abuja. It is not surprising that the charade was hatched and actuated by Oshiomhole and members of his Edo Peoples Movement (EPM), a proscribed dissident group in the state. For us, this is a joke taken too far and clearly shows that Mr. Adams Oshiomhole once again has set APC on a journey to perdition in Edo State as he did in Zamfara, Bayelsa, Rivers, Taraba and several other states,” he said.

He said under Oshiomhole, APC did not lose elections due to unpopularity but as a result of the lawless conduct allegedly choreographed by the national chairman.

“The last time we checked, the timetable released by Oshiomhole’s National Working Committee (NWC) fixed Edo Primary election for June 22, 2020, and it is expected to hold in Edo State, but we now hear that they have conducted the primary election three weeks before the set date in a jurisdiction far away from Edo State, making a mockery of our great party, APC, President Muhammadu Buhari, the presidency and all other institutions and esteemed individuals associated with our party.

“Our conclusion on this matter is that like all other illegal actions taken by Oshiomhole, this too is a nullity and shall come to no-effect,” he added.

Addressing journalists after purchasing the form at the national secretariat of the party yesterday in Abuja, the Chairman of the forum, Chief Nathaniel Momoh, said the action was a demonstration of the support and acceptability of majority of Edo State people towards the re-election of Obaseki.

He added that the form was a sign that the will of the people would prevail by ensuring that plots for the imposition of any candidate did not materialise.

Momoh noted that by this purchase, the people have spoken with one voice and have decided to entrust their mandate into the hands of Obaseki to enable him to consolidate his achievements.

He stated: “If almost all previous governors of the state have enjoyed a second term, some of them, despite their not too impressive performance in office, it will be a travesty of justice, a mockery of equity and fairness to deny a man whose tenure has touched every community in the state.

“The choice of Obaseki is not just an APC project as I have just mentioned. It is also the project of the market woman in Uselu market, the trader in Aviele, Council of Chiefs in Ososo, the 18-year-old and above student in Owan, the fruit trader in Iruekpen, that meat seller in Agenebode, that palm wine tapper in Esan, the cassava farmer in Ikpeshi, and many others.

“This is not a project for a gang of elite, who seek to whet their appetite with political power, relevance and undue control of the resources of the state, but one for the masses and well-meaning individuals passionate about the progress and development of the state.”