Nnamdi Kanu: The Flight To Freedom And Captivity 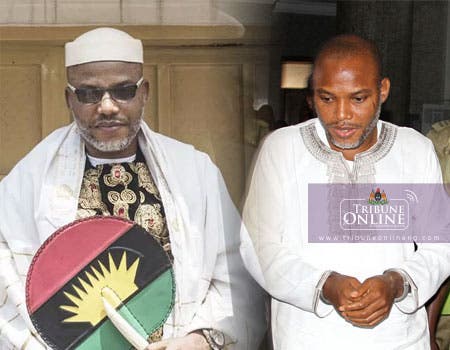 When the news hit the media wave on Tuesday, June 29, that the leader of the proscribed Indigenous People of Biafra (IPOB), Nnamdi Kanu, had been rearrested and brought to Nigeria, not many people believed it.

The immediate reaction of the major newspaper was caution. This was so because of the way social media has messed up information dissemination in the country.

However, moments later, the Federal Government, through the Attorney-General of the Federation (AGF), Abubakar Malami, confirmed that indeed, Kanu was intercepted on Sunday and was extradited to Nigeria for his re-arraignment before Justice Binta Nyako of the Federal High Court, Abuja.

While the rearrest of the IPOB leader is cheering news to the Federal Government, which has, in the last five years suffered many embarrassing moments at the hands of the proscribed group, the cult-like followership of Kanu and supporters of what he stands for in the agitation for an independent state for the Ndigbo were downcast by the news.

Nnamdi Kanu’s rise to stardom began with his headship of the agitation for what he termed the “freedom of Biafra,” when he was a director of the Radio Biafra, a mega force for the creation of awareness for the Movement for the Actualisation of Sovereign State of Biafra (MASSOB), led by Ralph Uwazuruike.

Kanu became the de facto leader of Radio Biafra in 2014 when Uwazuruike handed over the radio station to him.

With his stature rising in the self-determination movement, Kanu, in 2014, formed IPOB, a group that is more militant in approach and more aggressive in execution than the MASSOB. A year later, in September 2015, Nnamdi Kanu became a ‘champion’ when he was a guest speaker at the World Igbo Congress in Los Angeles, United States.

He assumed the clout of a full-blown armed agitator with his “we need guns and we need bullets” proclamation. He later, almost two years after the demand, explained in a 2017 interview that his demand for “guns and bullet” was for “self-defence” against the unending attacks on the Igbo nation by the Fulani herdsmen.

Worried by the violent nature of the IPOB agitation and the attendant results in collateral damages to the nation’s security architecture and strategy, the government, on October 18, 2015, arrested Kanu in Lagos, in an operation coordinated and executed by the personnel of the Department of State Services (DSS). Nigerians got to know, however, through Kanu’s counsel, that the IPOB leader was actually picked up at his Golden Tulip Essential Hotel, Ikeja, Lagos, on October 14 and his whereabouts in secrecy until his lawyers cried out.

The news of his arrest generated protests in the South-East states of Abia, Anambra, Ebonyi, Enugu and Imo; and in some parts of Bayelsa, Rivers, Cross River and Delta states of the South-South. The protests, many believed, led to his arraignment and the bail granted to him by a Wuse, Abuja magistrates’ court.

Not a few controversies trailed the Wuse Magistrates’ Court bail order as arguments and counter-arguments were marshalled to contest the propriety of the jurisdiction or otherwise of the lower court.

These arguments led to the various orders of the court for the DSS to produce the IPOB leader in court on November 23, 2015; just as the DSS claimed that it had obtained a High Court order to detain him for the next three months while the investigation continued.

Kanu’s lawyer, Vincent Obetta, fought vigorously until Kanu was eventually arraigned before Justice Nyako and was eventually granted bail on October 20, 2015, with Senator Enyinnaya Abaribe standing surety for him. The bail itself was not without controversy. The conditions, such as the one banning the IPOB leader from making any press statements, was considered too stringent.

While Kanu struggled to keep to the terms of the bail, another event occurred in September 2017 when IPOB loyalists protested what they termed the ‘disappearance’ of Kanu for almost a year and alleged that the government had secretly abducted him. The group claimed that about 28 of its members were killed by the security personnel deployed to curtail the uprising.

It was in the midst of the crisis that Kanu finally disappeared and resurfaced in faraway Israel in 2018.

While in exile, Kanu took total control of the IPOB activities, ordering the boycott of state-organised activities such as the Independence Day parade, the 2019 general election and the sit-at-home orders to the Ndigbo, especially on May 30, to mark the remembrance of the 1967 civil war.

In the course of all that, the Federal Government did not relent in its quest to get Kanu extradited to Nigeria to face his trial. The waiting game finally ended on Tuesday, when the AGF gleefully announced that Kanu had been rearrested and brought back to Nigeria. He was immediately arraigned before Justice Nyako and was ordered to be detained till July 26.

Speaking on why he jumped bail, Kanu, at his arraignment on Tuesday, said his house was unlawfully invaded by security men with his life seriously threatened, claiming that he would have been killed alongside others on the day of the invasion.

Till the July 26 date for the next appearance, it has been a flight to freedom and extradition to captivity for the self-acclaimed Rabi of Jewish Tradition.