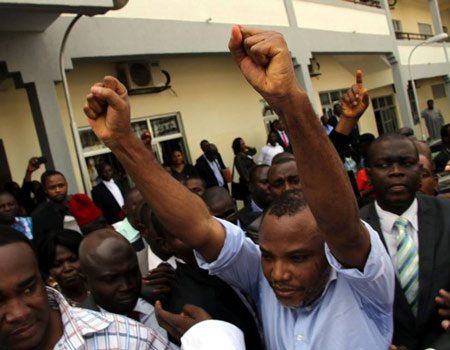 The Indigenous Peoples of Biafra (IPOB) and Eastern Security Network (ESN) have debunked the claim by an alleged ESN commander saying that Nnamdi Kanu wanted 2000 heads to avenge the killing of an ESN commander, Ikonso. Both IPOB and ESN, therefore, warned Nigerian security agencies to desist from using fake news, propaganda to demoralise them and their leader, Nnamdi Kanu.

The group made the call in a statement signed by its Media and Publicity Secretary Comrade Emma Powerful on Sunday while debunking the alleged false testimony against IPOB and ESN.

According to Emma, ESN is not the ones killing and destroying police stations or the unknown gunmen.

According to him, IPOB and ESN do not kill those who are not terrorists as the platform was established to defend their ancestral land against terrorists and bandits ravaging their communities.

He then called on the general public to disregard such claims by security agencies that are hunting ways to implicate their leader Nnamdi Kanu.

The statement reads: “The attention of the Indigenous People of Biafra (IPOB) ably led by our great and indomitable leader, Mazi Nnamdi Kanu, has been drawn to the fallacious claims by one man who claimed to be Eastern Security Network (ESN) Commander, and claiming that our Leader commanded him to kill security agents. He also shamelessly claimed that 10 girls were killed to prepare charms to fortify him which are false statements forced by DSS to make such unfounded statements against ESN, IPOB and our leader Mazi Nnamdi Kanu. The so-called Onyearmy said he joined ESN in 2019, while ESN was established on December 12, 2020; it exposed them that they coached him to talk rubbish against ESN, IPOB and Nnamdi Kanu.

“We want to make it clear that the purported ESN commander is not known to us and we discovered that he is a mole planted by government and security agencies into ESN. We know our commanders and they know us. The so-called man must be one of the criminals recruited by the Department of State Services to infiltrate ESN but our gallant men were alert and smarter than the DSS.

“It is obvious that the so-called ESN commander and his likes were the saboteurs planted by DSS to assassinate our gallant Ikonso. After killing Ikonso, they are now trying to concoct a tale to implicate our Leader Mazi Nnamdi Kanu. We are not surprised that Nigeria took back their mole after the death of Ikonso the unit commander whom the so-called Onyearmy spied over before his death. This Onyearmy was nowhere to be seen after the death of Ikonso; where did he got the information that our Leader Mazi Nnamdi Kanu gave the order for 2000 heads to bury Ikonso because he was not in the camp again from that day he gave Ikonso out to Nigeria security service, and can he provide parents of those thirteen virgins he was confessed during his interrogation. Nigerian security agencies must stop using fake news and propaganda to demoralize IPOB Nnamdi Kanu and ESN because we don’t kill those who are not terrorists.

“We are not however surprised that now that the Nigeria security has abducted our leader Mazi Nnamdi Kanu and put him into custody that they will sponsor all manner of criminals to see if they can implicate him and puncture his global reputation. The question every sane person will be asking is: why now that our leader Mazi Nnamdi Kanu is in custody that the so-called ESN Commander is making this ridiculous confessional statement? The Nigerian Security apparatus are shopping for compromised witnesses for their unfounded accusations levelled against our leader just as they did in 2015 when they arrested him the first time and they will fail in this their new project as they failed then in 2015.

“We state without ambiguity that our Leader Mazi Nnamdi Kanu, an ardent believer in God and an adherent of the Jewish faith does not believe in bloodshed and never asked anyone to kill to be fortified. He doesn’t believe in fetish powers and has openly preached against such ungodly practice.  IPOB and ESN do not also kill people to get powers. Our faith and values abhor such superstition. How can we be killing the same people we are putting our lives on the line to defend and liberate?”