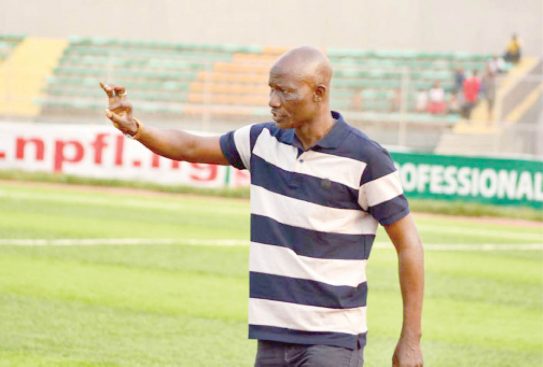 The president of Nigeria Football Coaches Association, Ladan Bosso has said his only problem with the technical adviser of the Super Eagles, Gernot Rohr is the refusal or failure of the coach to give opportunities to local players to feature in the senior national team. The Franco-German coach whose contract renewal with the Nigeria Football Federation is presently one of the contentious issues in the country’s football has not hidden his preference for foreign based players.

Apart from few NPFL players who have had opportunities to train with the Super Eagles, majority of the talents have been overlooked by the gaffer. Speaking to Journalist yesterday, the former Flying Eagles coach commended Rohr for improving on the fortunes of the Super Eagles but wondered why he has refused to take along some of the talented players in the NPFL. He, therefore, said the decision by the NFF to ask the coach to henceforth reside in Nigeria is a step in the right direction as he said Rohr would have more time to visit NPFL venues.

“Relatively, he has done well for this country. My problem with him is his inability to look inwards, to involve or think about the home based players for them to be part of the Super Eagles. That has always been my problem with him. “I am one of the longest serving coaches in the Nigeria Professional Football League, NPFL, so I know the abundant talents we have in there. “So I believe that he can get good players in the NPFL who can compete favourably with those players based in Europe. They can give them a good run for their money,” said the former Kano Pillars coach. While supporting the NFF on the decision for Rohr to reside in Nigeria, Bosso reiterated that it will give the coach the chance to follow the Nigerian league. He also said the players too will be motivated to give their best because they would be conscious of the fact that the technical adviser of the Super Eagles is watching them. “Nigeria is a very good country. If you are in Lagos, it is just as if you are in Europe. If you are in Abuja, it is like you are in Europe or Dubai. “Rohr should stay in Nigeria and help develop the local league. Once the players know they stand a chance to play for the Super Eagles straight from the NPFL, they would put in their best,” he said.