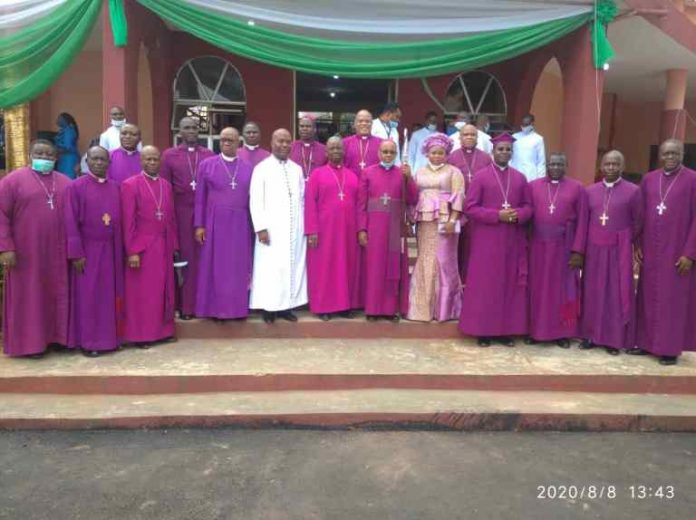 The President of 2020 Awka Anglican Diocesan Synod, Most Reverend Alexander Chibuzo Ibezim, PhD yesterday tasked leaders at various positions of authority to be proactive and just in order to realize Nigeria’s potentials.

Most Reverend Ibezim who is the Archbishop Ecclesiastical Province of the Niger, and Bishop of Awka Anglican Diocese, lamented that because of inactive attributes of our leaders that the country is in the verge of collapse.

He lamented: ‘ Nigeria as a nation has enormous potential which would be realized if our leaders choose to be active and just. Nigeria, right now , is on the verge of collapse. So many things are not done right. We are not sure of what is happening in the presidency. The Upper and Lower Houses are not forthcoming with reformative laws and worst still , persons are slaughtered on daily basis as Fulani Herders and Boko Haram group terrorise the peace of the nation, yet nothing is done about it. Most of our politicians are only interested in their selfish interests. Nigeria, with it’s population and economic size , can attract international investors. But the scare of Boko Haram insurgencies , Fulani Herdsmen incessant and brutal attacks and other security threats make it almost impossible to have these foreign investors in the country and it in turn affects the growth of Nigerian economy”.

Archbishop Ibezim called on federal government to support small scale industries as a way of minimizing unemployment rate in Nigeria.

The Anglican Prelate was speaking while presenting his Archbishop’s charge during the First Session of the Twelfth Synod of the Diocese of Awka, held at the All Saints’ Anglican Church Amaenyi Awka with theme ” The God of eternal desriny and His Major attributes”.

” There is yet to be a very strong and usable seamless platform to support small scale businesses. In as much as we want to reduce importation of major food items like rice, which is a commendable initiative of the Federal Government, the government should finance these farmers across the country to be able to meet up with the nation’s demands. Agriculture, in general, should be heavily financed to help build our economy. Nigeria is filled with active youths with innovative ideas and they should be encouraged. We as well, urge the government to look into infrastructural development…… “.

Archbishop Ibezim concluded by imploring Christians to imbibe the attitude of believing God and fulfilling Gods purpose in their lives.

In his speech, the Primate of all Nigeria, and Archbishop of Abuja Province, Most Reverend Henry Ndukuba, represented by the Bishop of Ikwo diocese, Right Reverend Kenneth Ifemena an indigene of Awka, while congratulating Archbishop Ibezim and Awka diocese for the apparent synod theme, described the theme as appropriate. He charged Christian’s to look on to Jesus, noting that the destiny of this nation is in the hands of God.

While accepting the Synod Charge as a working document, The Diocesan Chancellor, Justice OJ Okeke, thanked Archbishop Ibezim for the unique presentation of the Synod Charge, stating that it would contribute bountifully to the growth of the Church and Nigerian Society.

On her part, the wife of the Archbishop, Province of the Niger, and diocese of Awka, Mrs Chioma Ibezim, affirmed that the theme is targeted at redeeming and saving lost souls to Jesus Christ. Mrs Ibezim who is the President, Mothers’ Union, Womens’ and Girls’ Guild , Province of the Niger and Awka diocese informed the Archbishop that the diocesan women are soldily behind his Espiscopacy.

This year’s synod is the first time the Diocese of Awka is holding the Synod in the city of Awka, outside the Cathedral since the advent of Christianity in 1900.

The event is held annually to assess the progress of the diocese, review the laws governing each dioceses and to enact new ones as well as pointing out and tackling the challenges facing the diocese.

The Synod which is part of spreading the gospel of Jesus Christ and extending God’s Kingdom on earth recorded a major milestone as over five hundred clergymen of different ranks, over fifty bishops from various dioceses nationwide, monarchs, government officials including the Vice Chancellor of Nnamdi Azikiwe University Awka, Prof. Charles Esimome were in attendance. Prof Esimone decieved prayers from the synod for a successful term of office.

Chelsea Condemn Liverpool to Fifth-straight Defeat at Anfield, First in Their...