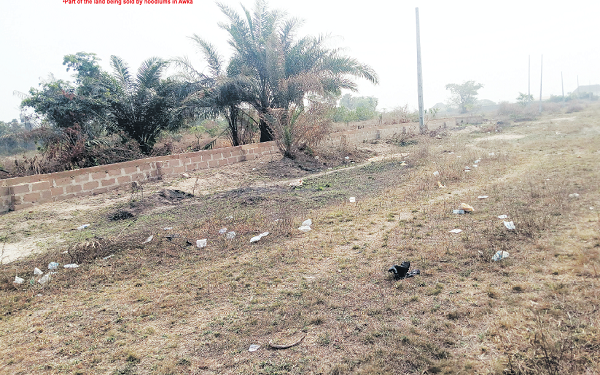 An unprecedented mayhem stares Awka, the capital of Anambra State, in the face unless the state and federal governments take decisive actions to nip it in the bud. This is on account of the activities of some land speculators who have invaded the community with the aim of selling lands without the necessary approvals.

Already, the hoodlums have mounted billboards offering for sale some plots of land at the government-approved layout in the state capital at N3 million per plot. Our correspondent gathered that the faceless land grabbers usually operate at night and have sold many plots of land to unsuspecting buyers without the knowledge of their owners or the leaders of the community.

The layout, known as Umuikenanunwa Communal Lands, is situated at Okpala Uzo (Imeagu), Aguaba Layout and Aguaba Forest Reserve in Umuayom village, Awka town, and the elders of the community, have called on the new Executive Director, Finance, of the Nigeria Maritime Administration and Safety Agency, NIMASA, Hon. Chudi Offodile, to come to their aid in his capacity as the Chairman of the community’s Land Management Committee. Offodile had replaced Chief Dilim Okafor, who held the position for years and, according to the people, managed the lands well.

He said: “We have a well structured management team appointed by the three sub families, namely Ezedebe, Eghumeneghi and Okpalanwoshie, and headed by Hon. Chudi Offodile, who took over from Chief Dilim Okafor with power of attorney issued to them.

“So, what some undesirable elements are doing is just an attempt to cause trouble in our land. And the worst part of it is that they are hiding to do it. We are solidly behind the state government.”

For Hon. Chris Nweke Ndigwe, a 78-year-old pioneer state chairman of the All Progressives Grand Alliance (APGA), the layout at Aguaba was approved and gazzetted by the state government in 1990. He said the hoodlums had been a thorn in the flesh of Awka community for many years, adding that they chose to toe the line of peace, hence the decision not to lay an ambush for them.

Ndigwe said: “We are working in tandem with the Anambra State Government on this matter. Awka community right now is highly polarised because of some undesirable elements. But we are not going to back down.” 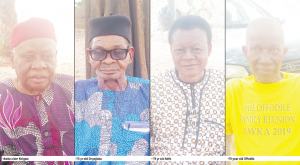 Another elder, Christian Ndife, the Secretary General of the Elders’ Council, said that it was unfortunate that some of the young people in the community do not want to do anything to help themselves other than engage in land sales.

The 78-year-old elder statesman noted that the “criminal elements” had removed all the beacons on the layout to deceive unsuspecting buyers.

Another elder in the community, 75-year-old Godwin Onyejiaka, also believed that some young men in the community were trying to set it ablaze by their actions. He said their decision to keep quiet was not impelled by cowardice. Rather, he said, it was meant to give peace a chance, particularly because the state government is also involved in the layout.

A former chairman of the Land Management Committee in the area, Chief Dilim Okafor, said the worst part of the actions of the hoodlums is that they sell a plot to as many as four persons. “Those miscreants have become terrors in this place and their actions are becoming unbearable,” he said.

Following the actions of the faceless land grabbers, the Anambra State Government has warned them to desist or regret their actions.

A former Commissioner for Lands, Okey Moka, had placed a caveat emptor from the government, warning that only the management of the Land Committee headed by Offodile and the state’s government approved surveyor are authorised to work in Aguaba Layout.

He said: “The Anambra State Ministry of Lands, Physical Planning and Rural Development has noted with deep sense of concern and responsibility the spate of illegal and ongoing land transactions at Aguaba Layout, which have also extended to the Millennium City Layout, a dream layout of the Anambra State Government, and mindful of the overt consequences and implications of such disdainful acts, is warning the unwary and uninformed persons that are being deceived to acquire parcels of land in the said layouts.

“Aguaba Layout, Awka, which shares a common boundary with the Millennium City Layout, was approved by the Anambra State Government in 1990 with gazette number 29 Vol. 15 of 2/8/1990 and has registered trustees whose statutory responsibility is to administer the said scheme in line with the covenants of the gazette, wellbeing of the original land owners and its occupants.

“Regrettably, illegal land transactions and activities at Aguaba Layout have greatly dovetailed into the Millennium City Layout and have consequently defaced a government-owned scheme and created a potential slum growth centre.

“The land speculators do this by engaging surveyors, who were neither approved by government nor authorised by the state’s Ministry of Lands to work at Aguaba Layout.

“By this ugly deed, the state government will not fold its hands and watch the brazen impunity to the detriment of the structural plan of the Awka Capital Territory.

“The state government has also noted that a lot of uninformed persons are being misled and deceived to illegally acquire parcels of land at the Millennium City Layout and Aguaba Layout statutorily designed for open spaces, state stadium, schools, roads, etc.

“The defacement of these layouts through the activities of individuals with larger than life attitude is capable of distorting these schemes and generating community restiveness if unchecked.

“The general public is therefore warned to stop forthwith, all land transactions, negotiations, construction/development on the parcels of land at the Millennium City and Aguaba Layouts that run counter to the approvals of the Anambra State Government.”

Already, the government has mandated the chairman of the board of trustees, Chief Dilim Okafor, to take full possession, control and administration of Aguaba Layout in line with the covenants of the extant, gazette and trustee act. It also warned that the processing and issuance of title documents on parcels of land not in conformity with the government approvals at Aguaba Layout and Millennium City would not be entertained.

The state government added that plans were also at the concluding stages to enforce development control measures and ensure orderliness at the two layouts in Awka.

It was observed that in addition to the government position on the said layouts, the Umuike people who own the said lands had through their counsel, Prof Ilochi Okafor, SAN, warned that any person who had paid any money to unauthorised members of the family or to any land management committee other than Umuike Family Land Committee, should go and recover their money because they had been scammed.

The six-member Board of Trustees in the community is led by Chief Dilim Okafor, while the Land Management Committee is led by the former member of House of Representatives, Chief Chudi Offodile. Other members include Sunday Mbadugha, Nwogu Nwonwu, Chukwudi Uchendu and Onwura Nnonyelu, to represent the various families.

Both the BoT and management committee have been inaugurated and have since resumed work.

Some of the people who purchased the land in the affected area told our correspondent that they were given the impression that it was the genuine owners of the land that sold to them.

The victims of the alleged fraudsters have threatened a showdown with the people they paid money to, if they were eventually driven out of the lands by the true owners.