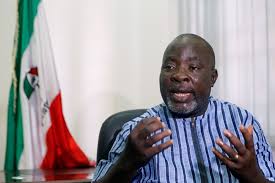 Nigeria’s main opposition party, the People’s Democratic Party (PDP) has condemned President Buhari’s nomination of the immediate past service chiefs for an ambassadorial appointment, describing the move as a decoy to confer diplomatic immunity on them and shield the former service chiefs from investigation.

In a statement signed by the National Publicity Secretary of the PDP Kola Ologbondiyan on Thursday, the party called on the Senate to “shun all partisan considerations and stand on the side of the people, particularly the victims of the atrocious regime of the ex-service chiefs by outrightly rejecting the demand by President Muhammadu Buhari to confirm them as ambassadors”.

The statement read: “The Peoples Democratic Party (PDP) firmly rejects plots by the Buhari Presidency and the All Progressives Congress (APC) to use the decoy of ambassadorial appointments to shield the immediate past service chiefs from investigation over alleged killing of innocent Nigerians and crimes against humanity under their inglorious watch.

“The PDP charges the Senate to eschew all partisan considerations and stand on the side of the people, particularly the victims of the atrocious regime of the ex-service chiefs by outrightly rejecting the demand by President Muhammadu Buhari to confirm them as ambassadors.

“It is indeed sacrilegious and a horrible assault on the sensibility of Nigerians that the APC government is seeking to use ambassadorial appointments as desperate measure to secure diplomatic immunity for the former commanders and protect them from investigation, arrest and possible prosecution by the International Criminal Court (ICC) for the atrocities committed against innocent Nigerians under their command.

“The PDP asserts that appointing the former service chiefs as ambassadors would confer diplomatic immunity on them and provide them a route for escape.

“The party further stated that taking such actions at a time the ICC has declared its readiness to commence full investigation on their alleged involvement in the crime against humanity in our country, appears to further validate the allegations against them.

“Moreover, the frenzy by officials of the Buhari Presidency in mounting pressure on the Senate to confirm such abominable ambassadorial nominations has further raised public apprehensions of a desperate attempt to cover the culpability of some other individuals connected to the APC administration.

“It is shocking that instead of allowing the former service chiefs to answer for the alleged crime against humanity under their command including reported cases of extra-judicial execution, killing of unarmed protesters at Lekki Toll Gate, Lagos, rape, illegal arrest as well as detention and torture of innocent Nigerians, the APC administration is rather plotting their escape.

“The accused service chiefs must not be allowed to use diplomatic immunity to escape investigation and possible prosecution for the killing of unarmed EndSARS protester at Lekki Toll gate and other parts of the country as well as the hundreds of civilians reportedly killed by soldiers in the Zaria massacre.

“This is in addition to series of reported military invasions and mass shooting in communities in Borno, Yobe, Rivers, Abia, Anambra among other states across the six geo-political zones of our country, where soldiers reportedly razed communities and massacred unarmed civilians under the command of the ex-service chiefs.

“Our party therefore calls on Nigerians, across board, to unite in rejecting these ambassadorial nominations for the accused former commanders and demand that President Buhari should immediately withdraw their nominations from the Senate.

“The least that is expected of President Buhari is to direct the former service chiefs to answer for the alleged crimes.”