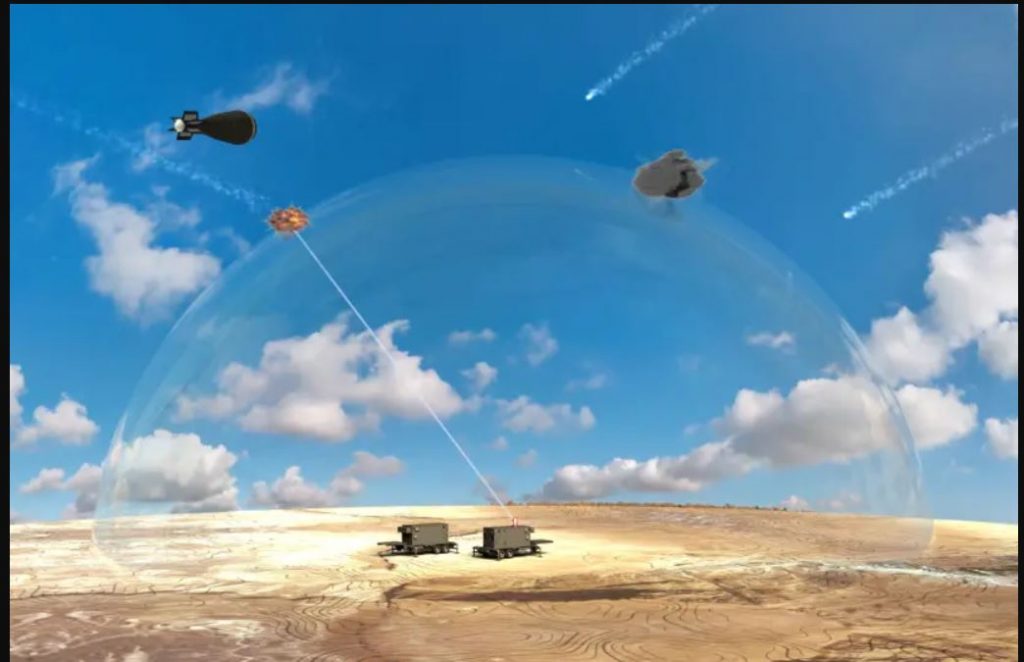 The Defense Ministry has made a technological breakthrough in the development of lasers that can intercept aerial threats, including rockets and anti-tank guided missiles, it announced Wednesday.

Speaking about this new addition to the existing tools of war employed by Israel, he said that “we will add a laser sword when dealing with threats from the North or the South.”

The enemies of Israel better not test our resolve or our abilities,” Bennett said.

Brig.-Gen. Yaniv Rotem, head of the Defense Ministry’s Directorate of Research and Development, said: “We are entering a new age of energy warfare in the air, on land and at sea. The R&D investments made by the DD [Directorate of Defense] R&D in recent years have placed the State of Israel among the leading countries in the field of high-energy laser systems.”

The ministry has been working for more than 10 years on powerful laser technology to enable the development of platforms to intercept a variety of threats, he said. It has carried out a number of successful interceptions of targets, including mortar shells, drones and antitank missiles, at a variety of ranges over the years.

“This is a dramatic solution to rocket fire,” said Dubi Oster, head of the DDR&D Optronics Department. “We have been working on this for years. But it is challenging to get a good-quality beam to stay the size you need at the range you need… for example, a beam the diameter of a coin from here [in Tel Aviv] to Herzliya.”

While most developments over the years – both in Israel and abroad – have been ineffective, significant achievements have been made over the past year and a half as a result of collaboration between the ministry and defense companies, including Rafael and Elbit Systems, as well as academic institutions. The breakthrough recently made by the ministry is based on the precision of the laser beam, which can be focused on long-range targets and which can overcome atmospheric disturbances such as clouds and dust storms.

According to Oster, the ministry was able to take several laser beams and, with an advanced algorithm, connect them to get one strong beam that is able to intercept and take down a variety of threats. Based on high-energy electric lasers rather than chemical laser technology, the robust system will complement the other layers of Israel’s aerial defenses and will be a strategic change in the defense capabilities of the state, the ministry said.

According to Rotem, some of the advantages of the high-energy lasers include the ability to continually use the system at lower cost, higher effectiveness and with efficient management. They will also allow for a decrease in the number of missile interceptors used and the future potential to intercept a variety of threats, including unmanned aerial vehicles, drones and guided rockets.

“During a war, missile interceptors will at one point run out, but with this system, as long as you have electricity, you have a never-ending supply,” he said.

“This is a weapon that you can’t see or hear,” Rotem said, adding that while it is not free since it runs on electricity, every interception will only cost a few dollars, as opposed to interceptor missiles that can run into the thousands.

The use of two different and complementary technologies – kinetic air-defense-like systems, such as the Iron Dome, and laser platforms – “is a game-changer,” Rotem said.

“This is one system with many options – the weapon of the future,” Rotem said.

Throughout the year there will be several trials of the demos’ capabilities, the ministry said. If effective, they will be deployed to the Gaza border area.

“This technology enables the development of highly effective operational systems that will serve as an additional layer of defense to secure the State of Israel by air, land and sea,” the ministry said.