Bundesliga Boss says the German league must repay the trust 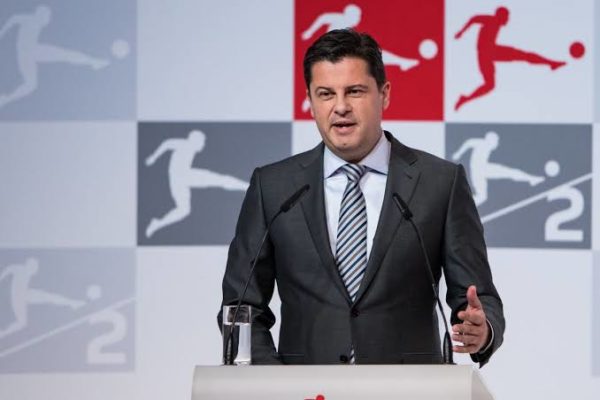 The boss of the Bundesliga says the German league must repay the trust shown by Angela Merkel’s government if football returns, as expected on May 9, despite the coronavirus pandemic.

“It is our task to repay this trust,” said Christian Seifert, CEO of the German Football League (DFL).

“It is the task of the clubs, but also of the players.

With the German government slowly easing restrictions, there is hope the top two tiers of the Bundesliga can return to action.

On Thursday, Seifert will host a video conference with the top clubs to discuss how to restart league football, which was halted on March 13.

Many details are set to be finalised, including the key issue of regular testing of players.

Matches would be played in near-empty stadiums — known as ‘ghost games’ in German — with fans locked out.

Hopes that the season can resume in a fortnight and be completed by June 30 received a huge boost Monday from Germany’s health minister Jens Spahn.

“The decisive factor is that the risk of infection is minimised.

“For millions of football fans, this would then be a piece of normality again from May 9, even if it is in an empty stadium.”

However, there are still dozens of details to iron out.

“Games with fans are completely unthinkable. Even ghost games are a tightrope walk,” insisted Soeder.

“I am convinced that the fans will not gather outside the stadiums. We will not only call for this, we will know how to prevent it,” insisted the Bayern boss.

The exact numbers of who will be allowed into stadiums for each game will be strictly regulated.

Only 126 people will be allowed pitchside with a maximum of eight backroom staff per team.

There will be only four ball boys, down from 12 for normal games, and 30 match stewards in each stadium, compared with 300 normally.

And there are plans to have 50 stewards outside each ground to try to prevent fans from meeting up.

Like Rummenigge, Dortmund CEO Hans-Joachim Watzke is happy with the proposals.

“This is a great leap of faith and I am very grateful to Armin Laschet and Markus Soeder for giving us this leap of faith,” said Watzke.

“Football is an opportunity to give millions of fans a little more zest for life again.”