How EFCC Chairman-Designate, Bawa, Others Were Secretly Promoted 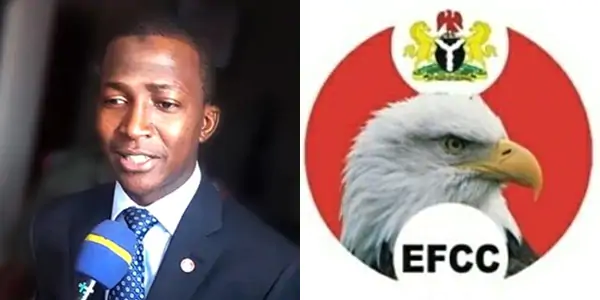 The Economic and Financial Crimes Commission (EFCC) designate-chairman, Abdulrasheed Bawa and other staff have been reportedly promoted on Friday by the anti-graft agency.

With the promotion, Bawa, who was nominated by President Muhammad Buhari on Tuesday, is now qualified to head the Commission in line with Section 2(1)(a)(ii) of the EFCC Establishment Act, 2004 subject to the approval of the Senate.

The section stipulates that anyone to be appointed as the commission’s chairman shall “be a serving or retired member of any government security or law enforcement agency not below the rank of Assistant Commissioner of Police or equivalent”. There had been arguments over the qualification of Bawa to head the EFCC based on the fact that as of the time of his nomination by the President to replace Mr Ibrahim Magu, the former Acting Chairman of the commission suspended last June, he was on Level 13 though he has the cognate experience of not less than 15 years.

Bawa joined the commission in 2005 as one of its pioneer cadet officers corps and moved to the rank of Principal Detective Superintendent (PDS) before his nomination by President Buhari.

Though those on the latest promotion list are yet to be given their promotion letters, PRNigeria had claimed it was stated in an internal memo it sighted and signed by one Femi Peter Gbarufu, issued on Friday, and entitled, “Release of Promotion List”, that promotion letters would be issued to the affected staff, as soon as possible by the Human Resources Unit.

Sources in the commission confirmed to Nigerian Tribune that there was an initial list containing the names of staff designated for promotion, adding that their promotion was backdated to January, 2021. One of the sources disclosed that the newly promoted staff, including Bawa, were not among those promoted in January who had already collected their promotion letters.

The source, whose name was on the January list of promotion, told Nigerian Tribune yesterday that, “There was indeed a new list of promotion released on Friday. Those on the list were not among my batch. My batch got promoted late January and I collected my letter three days ago.”

This, according to another source, might have been done “in such a way not to make the promotion suspicious so that there won’t be any complaints that the new chairman was given a special promotion”.

Efforts made to get commission’s Head, Media and Publicity, Wilson Uwujaren, proved abortive as his lines were switched off, while he did not respond to WhatsApp messages sent to him as of the time of filing this report.

NGO writes Lawan Meanwhile, a non-governmental organisation, Centre for Anti-Corruption and Open Leadership (CACOL), has petitioned the Senate President, Dr Ahmed Lawan, and asked the Senate to properly scrutinise the EFCC chairman-designate, Mr Abdulrasheed Bawa, before taking a decision on his appointment.

CACOL, in a letter by its chairman, Mr Debo Adeniran, said the petition had become necessary following allegations of corrupt practices against Mr Bawa, and pleaded that the Senate should “please take the pains to dig deep into Mr. Abdulrasheed Bawa’s record of overall performance as well as that of corruption allegation leveled against him.” According to the coalition of NGOs, its petition was part of its “basic responsibility of blowing the whistle on issues centering on corruption in whatever form or guise in governance”, noting that it would be shirking its responsibility if it didn’t bring to the attention of the Senate the fact that there were rumours and media reports that the chairman-nominee might be tainted.

The group decried the circumstances that led to the fall of Mr. Ibrahim Magu as the chairman of EFCC and argued that appointing a replacement that has a baggage would cast question marks on the anti-corruption war of the Federal Government under President Muhammadu Buhari.

“We are therefore constrained at this point in time to bring to your attention our critical reaction to the nomination of Mr. Abdulrasheed Bawa as the Chairman of EFCC. “While recognising the President’s constitutional prerogative and right to make appointments in accordance with Paragraph 2(3) of Part 1, CAP E1 of EFCC Act 2004, the Centre for Anti-Corruption and Open Leadership considers it a service to the nation, by providing information that might be helpful to your ratification in that regard”, the group said in the petition. It called on the Senate to note some contradictions linked to the chairman-designate before screening him as chairman of the EFCC, saying “according to EFCC Establishment Act, Section 2a (ii) the Chairman to be appointed should: “be a serving or retired member of any security or law enforcement agency not below the rank of Assistant Commissioner of Police or equivalent”. Such equivalence in the EFCC is Grade Level 15, while Bawa is on Grade Level 13.”

In a related development, an Abuja-based lawyer, Osuagwu Ugochukwu, has dragged the Senate to court, seeking an order restraining the upper legislative chamber from screening Mr. Bawa for the position of chairman of the EFCC. Ugochukwu, in a mater he brought before the Federal High Court sitting in Abuja, is asking the court to declare that Mr Bawa is not qualified to be the chairman of EFCC because, according to him, “he is a level 13 public service officer and not an Assistant Commissioner of Police (ACP) or its equivalent.”