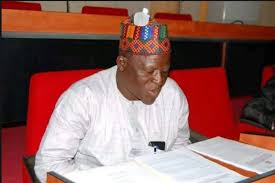 A member representing Dass constituency in the Bauchi State House of Assembly, Honourable Musa Mante has been killed.

The lawmaker was murdered around 2 am by gunmen in his residence at Baraza, Dass Local Government Area of the state.

The gunmen also abducted his two wives and a year-old-daughter.

When contacted, the Police Public Relations Officer in the state, Ahmed Wakili confirmed the incident to Channels Television.

He explained that the police has intensified efforts to rescue the victims and arrest perpetrators.

Meanwhile, the lawmaker’s corpse has been deposited at the Abubakar Tafawa Balewa University Teaching Hospital, Bauchi.

The deceased lawmaker will be buried later today according to Islamic rites.

Reacting to the incident, the Speaker of the Bauchi State House of Assembly, Abubakar Suleiman, described Baraza’s death as a shocking and great loss to the state.

In a condolence message to the family, the Speaker said he is yet to recover from the traumatic grief of the devastating news of the merciless murder of Hon. Mante in his village.

While condemning the attack, Suleiman vowed to work with security agencies to fish out the perpetrators of the devilish act.

The Speaker, who represents Dangaladiman Ningi constituency in the house, described the deceased as God-fearing, humble and a dependable ally who served and related with people selflessly and honourably.

“As a member representing the good people of Dass, Hon. Mante dedicated his time and resources to ensure the well-being of his constituents. He was always at the forefront of serving the interest of his people and dear State.

“He lived a simple and exemplary life worthy of emulation. The fact that he had lived in his Village interacting and serving his people, speaks volumes on how faithful and humble Late Hon. Musa Mante Baraza was.

“As Chairman House Committee on Public Petitions Hon. Mante has diligently and effectively discharged his responsibility by being so much dedicated and committed to finding solutions to many problems affecting people across the State.

“He has contributed immensely in the lawmaking business and other functions of Bauchi State House of Assembly.

“He was so much friendly and kind to all of us his colleagues and staff of the Assembly. Indeed we will lose his elderly and statesmanly gestures, joviality and the jokes we always share during plenary, meetings and other engagements,” the Speaker said.

According to Suleiman, Mante died at a time that his family, people of Dass Constituency and Bauchi State needed him the most.

He, therefore, urged the bereaved family, colleagues and constituents to take solace and prayed to Almighty Allah to forgive his shortcomings and give them the fortitude to bear the painful and irreparable loss.