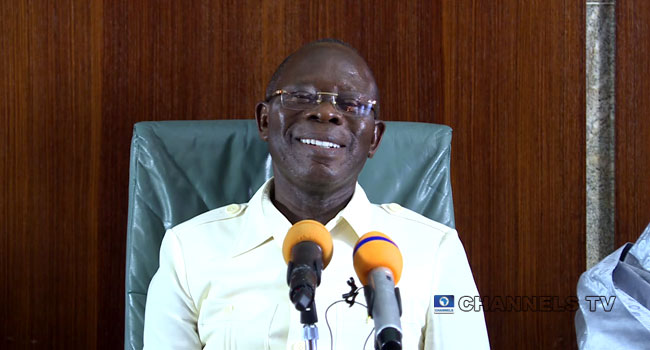 Speaker of the House of Representatives, Femi Gbajabiamila has congratulated the National Chairman of the All Progressives Congress (APC), Adams Oshiomhole, on his 68th birthday.

Gbajabiamila said Oshiomhole’s sterling leadership qualities as the APC National Chairman have contributed tremendously in stabilising the party since his coming on board in July, 2018.

In a congratulatory message signed on Friday by his Special Adviser on Media and Publicity, Lanre Lasisi, the Speaker said Oshiomhole has proven to be one committed Nigerian, who continues to work tirelessly in moving the country forward.

“On this day, I join millions of Nigerians, especially members of our party, the ruling All Progressives Congress (APC), in congratulating and celebrating our National Chairman on his 68th birthday.

“Right from his days as a labour leader to his period as an elected governor of Edo State for eight years, Adams Oshiomhole has proven his mettle as a leader with an uncommon sense of patriotism.

“He has brought his experience of decades and political sagacity to bear in leading the APC to victory during the 2019 general elections. His firm commitment to party supremacy and discipline is a trait that many do not have,” Gbajabiamila said.

Also describing him as a pragmatic leader, Gbajabiamila described the APC Chairman as one individual that has weathered the storm in difficult circumstances and has come out stronger and has remained ever determined to ensure the continuous unity and harmony among members of the APC.