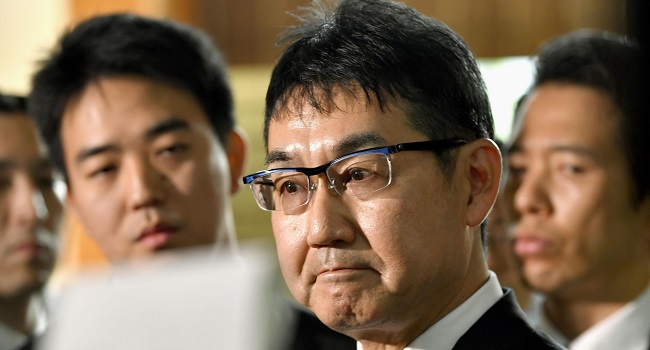 A former Japanese justice minister received a three-year jail term on Friday for vote-buying in an attempt to get his wife elected to a national office, local media said.

Katsuyuki Kawai, 58, was found guilty of charges that he distributed 29 million yen ($260,000 at today’s rates) to about 100 people in 2019, to help secure an upper house seat for his wife Anri, national broadcaster NHK said.

Officials at the Tokyo District Court could not immediately confirm the reports.

Katsuyuki, a close confidant of former prime minister Shinzo Abe, had reversed his earlier claims of innocence and broadly conceded the allegations against him.

Anri, who won her seat in the July 2019 election, has already been found guilty over her role in the scheme and received a suspended sentence of 16 months earlier this year.

Katsuyuki’s sentence is not suspended, meaning he faces jail time. But the Yomiuri Shimbun daily reported that he appealed.

He was named justice minister by Abe in 2019 but left the office after only a few weeks as the scandal emerged.