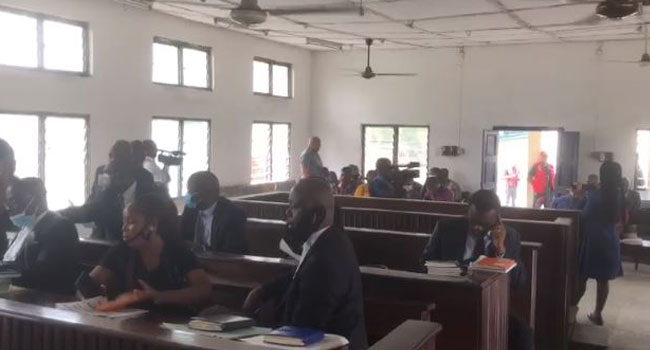 The Imo State police command has arraigned 14 persons including a senior legislative aide to Senator Rochas Okorocha, Steve Asimobi in a magistrate court in Owerri.

They are said to have participated in the ‘forceful invasion’ of the Royal Spring Palm Hotel which was sealed by the state government.

Spokesman to the state command, Orlando Ikeokwu who confirmed the arraignment also stated that Senator Rochas Okorocha who was in police custody for questioning based on the complaints lodged by the state government over the matter, was released on Sunday.

Giving further details regarding the 14 being arraigned, Ikeokwu said the suspects were facing a 6-count charge bothering on conspiracy, disobedience to lawful order, willingly and unlawful destruction of the official seal of the Imo State Government, conduct capable of causing a breach of peace.

Others are unlawful possession of firearms and a defamatory action on social media against the Governor of Imo state with the intent to injure the reputation of the state govt and person of Governor Hope Uzodimma.

Meanwhile, the Imo State police command has said it will not hesitate to charge Senator Rochas Okorocha to court if investigations reveal that he committed an offence on Sunday while trying to unseal the Royal Spring Palm Estate which is reportedly linked to his wife, Nkechi.

Police spokesman Orlando Ikeokwu who made this known while featuring on Channels Television’s Sunrise Daily said the Force will charge anybody found culpable, adding that if an investigation proves that Okorocha has committed an offence, he will be charged to court.

Okorocha was arrested after he went to the Royal Spring Palm with his supporters, policemen, soldiers and personnel of the National Security and Civil Defence Corps and ordered the unsealing of the estate.

Commenting on his arrest, Okorocha had alleged that his predecessor, Governor Hope Uzodimma, attacked him with “more than 1,000 thugs” but the state Commissioner for Information, Declan Emelumba, dismissed Okorocha’s claim, stressing that the former governor’s arrest was in line with the report of a White Paper, which indicated that the Royal Palm Estate was built with taxpayers’ money and not Okorocha wife’s property.