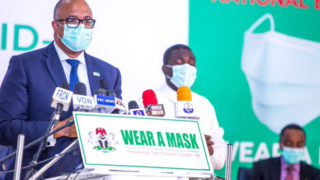 The Federal Government has imposed new restrictions amid the rising cases of coronavirus (COVID-19) in various parts of the country.

Mr Boss Mustapha, who is the Chairman of the Presidential Task Force (PTF) on COVID-19, announced this on Monday at the briefing of the task force in Abuja, the nation’s capital.

He explained that the directives were advisories issued to state authorities for implementation in the next five weeks.

The new restrictions include the closure of all bars, nightclubs, pubs and event centres, as well as recreational venues in all states and the Federal Capital Territory (FCT).

All restaurants were also directed to close, except those providing services to hotel residents, takeaways, home deliveries, and drive-ins.

Similarly, all informal and formal festivity events, including weddings, conferences, congresses, office parties, concerts, seminars, sporting activities, end of year events, have been restricted to not more than 50 people.

The government also limited all gatherings linked to religious events to less than 50 per cent of the capacity of the facility of use which physical distancing and use of face masks should be strictly enforced.

According to Mr Mustapha, who is also the Secretary to the Government of the Federation (SGF), events where more than 50 people are attending should be held outdoors only.

He added that public transportation systems should carry passengers not more than 50 per cent of their capacity, in compliance with social distancing rules.

Read the SGF’s full speech at the briefing below:

REMARKS OF THE CHAIRMAN OF THE PTF FOR THE NATIONAL BRIEFING OF MONDAY, 21ST DECEMBER, 2020

​Over the past four briefings, the PTF has been raising the alert flag on the rising number of infections in the country and the possibility of a second wave arriving at our shores.

​Recent Epidemiology records confirm to the PTF that Nigeria is now facing a rise in confirmed COVID-19 cases nationwide which is similar to the second wave of infections occurring in other countries across the world.

Particularly, Lagos, Kaduna and the FCT have emerged as the new epicentres during this period, with over 70% of all confirmed cases.

Two major indicators highlight the current increase in cases and transmission across Nigeria. These are:

Notwithstanding the fact that our testing numbers are fast approaching the peak recorded in July 2020, the number of cases being reported are disproportionately higher.

For example, in the FCT, despite recording an increase of 85% in tests conducted over the last week, the number of confirmed cases increased by 285% during the same time period; and

These trends point to a higher Test Positivity Rate (TPR) – the number of positive cases detected as a proportion of all tests).

The TPR was below 5% through September and October and we recorded a low point of 3% nationally in late October 2020. However, recent trends in cases have seen this number increase to 10% in the second week of December.

These high numbers are further reflected in the increase of admissions to COVID-19 treatment centres and fatalities, particularly in the three epicentre states.

​The result of the analysis carried out by the PTF further indicate that the current pattern of spread and the surge is likely to be driven by the following factors:

The lack of compliance with non-pharmaceutical interventions – particularly the disregard for mask use in public, large gatherings as a result of events linked to the yuletide season and recent civil demonstrations,

Further disregard for other public health preventive measures, such as hand hygiene and physical distance requirements,

The activities and assumptions of our youthful population which has resulted in an increase in the infection rate among young people, who are subsequently infecting older and more vulnerable family members.

​From our assessment, the current situation are clearly the consequences of certain occurrences and events of the last few weeks. These include:

Sudden increase in social gatherings involving large congregations from different parts of the country, and the world, at events such as weddings, religious activities, political rallies, conferences and end of year celebrations,

These events, classified globally as ‘supers-spreader events’, make the risk of a single infection causing a large outbreak among attendees significantly higher,

Furthermore, as we reopened the economy, we experienced increased economic, social and religious gatherings and activities all of which have combined to play a part in viral transmissions. These include:

The opening of the international airspace in September 2020 – while the average number of daily imported infections into the country in the last 90 days is estimated to be about seven cases, compared to 100-150 reported new infections in the community since the beginning of community transmission, the test positivity rate in travellers arriving Lagos has recently doubled to 6.3%,

The resumption of NYSC orientation camps – this risk has been mitigated by ensuring that all NYSC members were screened for COVID-19 prior to admission to camp, but confirmed cases have still been identified through tests carried out,

The full opening of offices with the return to work of government workers from GL. 12 and below – outbreaks have also been reported in public offices, most likely linked to overcrowding, poor ventilation and the lack of compliance with non-pharmaceutical interventions, and,

The opening of the economy with progressive relaxation of restrictions in congregational areas such as places of worship, restaurants, bars, lounges, shopping, and event centres.

You will also recall that the PTF established the Nigeria International Travel Portal for the control of possible importation of the virus.

The following statistics will be of interest:

As at date, 163,818 inbound travellers have been captured on the portal,

20,216 (31%) have not shown up for post-arrival test thereby endangering members of the community and breaching the protocols they signed up to.

​The PTF has concluded arrangements with the Nigeria Immigration Service to impose sanctions on these defaulters for breaching the public health protocols, within the ambit of the law.

​The PTF has surveyed developments and actions taken by governments around the world, assessed our domestic environment and has accordingly submitted its recommendations to Mr President on immediate measures to be taken.

​Accordingly, His Excellency, Muhammadu Buhari, President of the Federal Republic of Nigeria has authorised the PTF to engage with the States and the FCT to assume full ownership of this stage of the response by deploying legal structures and resources, including enforcement to manage the pandemic within their jurisdictions.

​In line with the authorisation, the PTF wishes to issue the following advisories to sub-national entities for implementation over the next five weeks because these activities are considered super spreader events:

Close all restaurants except those providing services to hotel residents; takeaways, home deliveries and drive-ins shall remain closed,

Restrict all informal and formal festivity events including weddings, conferences, congresses, office parties, concerts, seminars, sporting activities, end of year events shall be restricted to not more than 50 persons,

Limit all gatherings linked to religious events to less than 50% capacity of the facility of use during which physical distancing; mandatory use of face masks shall be strictly enforced,

Where more than 50 persons are attending, any such events, the gathering should be held outdoors only,

Public transportation systems are to carry passengers not more than 50% of their capacity in compliance with social distancing rules.

Enforce compliance with NPI protocols, especially the advisory on wearing of face masks in public spaces,

To reduce overcrowding in public spaces, markets, shopping centres, offices and schools, states are advised to implement the following:

Encourage virtual meetings in government offices. The leadership of such offices are to ensure that all offices are well-ventilated offices, and encourage staff to work from home where possible,

All government staff on GL.12 and below are to stay at home for the next 5 weeks; Permanent Secretaries and Chief Executives are to be held accountable for enforcing NPI rules in their domains with frequent spot checks,

The PTF on the advice of the Federal Ministry of Education expects that schools would have vacated from the 18th December 2020 and remain closed till at least the 18th of January 2021 to enable the measures introduced to take effect,

All persons above the age of 60yrs and/or with comorbidities are to be encouraged to stay at home and avoid crowds,

All non-essential travels – both domestic and international during the holiday season are seriously discouraged,

To strengthen risk communication and community engagement activities over the next five weeks, states are encouraged to:

Reach out to youths and younger adults with health promotion activities,

Invest in local face mask purchase and distribution to the general public to encourage use.

Where applicable, the PTF shall also implement these authorisations.

For example, it shall work with the Nigeria Immigration Service to impose sanctions on all in-bound travellers who violated the travel protocols and endangered the lives of their loved ones and other citizens by refusing to take the post-arrival test.

The PTF will similarly work with the Head of the Civil Service of the Federation to implement aspects related to the Public Service.

​A lot of discussions is still going on around the calls for the restriction of international travels due to the discovery of new strains of the virus in certain countries.

The PTF, Aviation and health authorities including the WHO, are assessing the situation closely and would take a position as soon as a cogent scientific basis are established.

The protection of Nigerians remains our primary concern and we reassure Nigerians of our resolve not to relent.

​Tomorrow, Tuesday 22nd December 2020 at 3.00pm, the PTF shall be submitting its end of the year (2020) Report to Mr President and Nigerians shall be kept abreast of developments in this regard.

​I now call on the Hon. Minister of Health, the Director-General (NCDC) and the National Coordinator to update you on the technical developments.

​I thank you for listening.