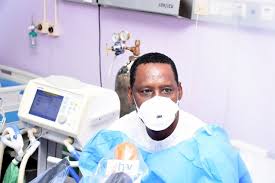 Dr Mohammed Kawu, Acting Secretary, FCT Health and Human Services Secretariat, has been discharged from the Asokoro District Hospital, Abuja, after he tested negative for COVID-19.

Kawu disclosed this in a statement in Abuja on Sunday, shortly after he was discharged from the hospital.

The News Agency of Nigeria (NAN), reports that the Acting Secretary had announced that he and some members of his family contracted the disease about two weeks ago.

Kawu recounting his experience as a COVID-19 patient, said he had moderate to severe symptoms.

“I developed chest infection, so I had to be on antibiotics for some days. But thank God, myself and members of my family do not have the symptoms any more and we have been discharged from the isolation centre,”he said.

He said the final tests conducted on them returned negative which prompted their discharge.

The acting secretary, however, warned against stigmatising victims of the disease.

“Even me, I was not spared. I heard that people around the neighborhood where I live were spreading the news in fear. So we need to really work on the stigma issue,” he said.

Kawu reiterated that COVID- 19 was real, adding that anybody could be infected, warning that the disease could be fatal.
“It is important that everyone follows all the extant guidelines of hand washing or sanitising, maintain social distancing wearing of facial covering and staying at home”, he said.