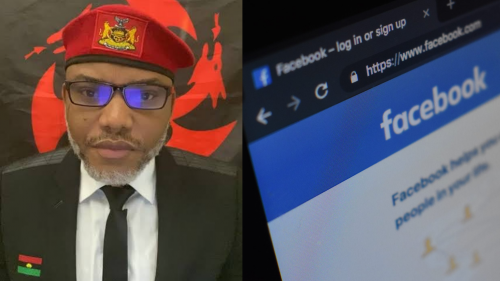 The Indigenous People of Biafra has berated the social media giant, Facebook, for blocking the account of its leader, Mazi Nnamdi Kanu.

This was contained in a press statement issued and made available to SaharaReporters by the media and publicity secretary, Emma Powerful, on Wednesday.

“The Indigenous People of Biafra (IPOB) is appalled at the despicable attitude of Facebook for blocking the Facebook page of our leader, Mazi Nnamdi Kanu, after his expository and explosive live broadcast on Tuesday night. It is not only baffling but too petty for a global social media giant like Facebook to allow itself to be used by agents of oppression in Nigeria to suppress the truth,” the statement partly read.

“We strongly condemn this attitude of Facebook managers in Lagos and Abuja who collude with corrupt Nigerian government officials to suppress the free flow of Information via their platform. This unconscionable and reprehensible attitude amounts to partnering with perpetrators of human rights abuses and other criminal activities masterminded by the Nigeria state against innocent citizens.

“The Fulani-controlled federal government and its foot soldiers – terrorist herdsmen and bandits – have continued to subjugate indigenous nations in the country, including Biafrans with the intent for conquest. These foot soldiers on a daily basis unleash all sorts of mayhem on the innocent and hapless indigenous peoples while the federal government mischievously remains docile.

“These vampires masquerading as herdsmen have forcibly seized our forests and converted our farms to grazing fields for their cattle. They have equally turned our ancestral lands to slaughterhouses where they kill with impunity in most dehumanising manners, innocent locals going about their legitimate business. They commit these crimes unchallenged by security operatives. They kidnap for ransoms, maim and rape our women. They feed their cattle with our crops, and Facebook is saying we don’t have a right to cry out?”

The IPOB spokesperson described the attitude of the Mark Zuckerberg-managed Facebook as oppressive and prevention of information flow, which he said was similar to how the British government prevented information from Biafra from going out during the Nigerian Civil War of 1967 — 1970.

“Now that our leader has started exposing the atrocities of these wolves in human clothing, Facebook has decided to be an accomplice to mass murder and oppressive tendencies of Fulani Janjaweed rulers of Nigeria. Why should Facebook block the account of the leader of the largest peaceful mass movement in the world for speaking the bitter truth people are too terrified to talk about?

“Why hasn’t Facebook prevailed on the perpetrators of these heinous crimes in Nigeria to stop their atrocities instead of denying innocent victims media access? Facebook is quick to fall for the lie of agents of oppression and accuse us of hate speech but fails to realise that hate action begets hate speech if in the Facebook lexicon, bitter truth translates to hate speech.

“This unholy act is only akin to what Britain and her allies did to Biafra during the Genocidal War of 1967-70 when they imposed land, air and media blockade on Biafra in order to deny the truth about the ongoing genocide from going out.

“Facebook, it seems does not want the atrocities of Fulani killer herdsmen to come to the knowledge of the world but they have failed woefully. Facebook is today assisting an oppressive government that pampers, frees and settles ‘captured’ terrorists while doing nothing to protect or rehabilitate victims of terror.

“But our message to Facebook is simple: no matter how hard you try to suppress the gospel of truth being preached by our leader, the struggle for Biafra liberation cannot be slowed down. On the contrary, our efforts will be intensified because Biafra restoration is a divine mandate that must be accomplished in this era.

“We are very resolute in our resolve to restore Biafra and will not be deterred. If you like, block all Biafran activists on your platform, we shall keep pushing on until Biafra is fully restored.

In the release, however, IPOB spokesman enumerated other options to be explored in getting information from Kanu henceforth.

“We, therefore, wish to encourage our leader’s teeming global audience to follow him and hook up to his live broadcasts via IPOB’s numerous other platforms. Our leader can be followed through many other platforms such as Twitter, YouTube, IPOB Community Radio App, Radio Biafra app, satellite and FM.

“May we therefore remind all those compromised local staff of Facebook in Lagos and Abuja that but for Nnamdi Kanu and IPOB, their families in their communities would have today been overrun by herdsmen and terrorists. An accomplice to a cruel man will surely get the reward of cruelty!”