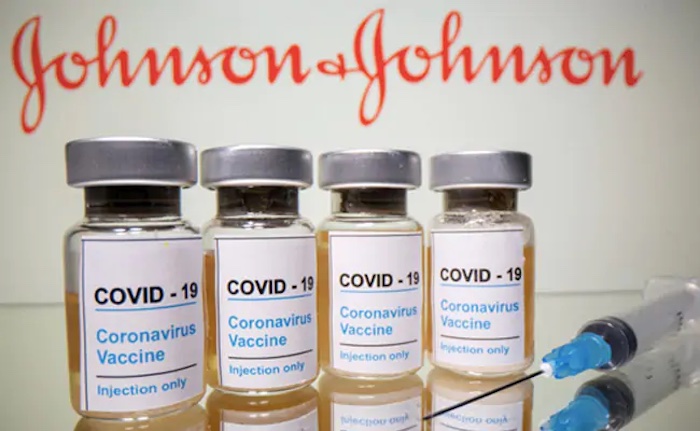 The US, South Africa and European Union will temporarily stop the rollout of the Johnson & Johnson (J&J) Covid jab, after reports of rare blood clotting.

Six cases were detected in more than 6.8 million doses of the vaccine, the US Food and Drug Administration (FDA) said.

Johnson & Johnson has paused its EU rollout, which started this week.

It follows similar cases after doses of the AstraZeneca vaccine, which prompted curbs to its use.

The FDA said it was recommending the temporary pause “out of an abundance of caution”. It confirmed that one patient died from blood clotting complications, and another is in a critical condition.

All six cases were in women aged between 18 and 48, with symptoms appearing six to 13 days after vaccination.

Following the advice, all federal sites in the US have stopped using the vaccine until further investigations into its safety are completed. State and private contractors are expected to follow suit.

Johnson & Johnson is a US health care company, but the vaccine was developed mainly by its pharmaceutical branch in Belgium and is also known as Janssen. Unlike some of the other jabs, it is given as a single shot and can be stored at normal refrigerator temperatures, making it easier to distribute in hotter climates or more remote areas.

While many countries have pre-ordered millions of doses, it has only been approved in a few nations.

It was cleared for use in the US on 27 February, but the Pfizer-BioNTech and Moderna vaccines have been used more widely. The J&J vaccine has been administered to nearly seven million people in the US, which is around 3% of the total immunisations given so far.

Dr Anthony Fauci, the country’s top Covid adviser, said it was too early to comment on whether it could have its authorisation revoked.

South Africa, which was the first country to administer the vaccine, has also paused its use, although no cases of blood clots have been reported in the country.

The jab became the preferred vaccine thereafter studies showed it had a higher protection rate against the South African variant than other jabs. Since mid-February, nearly 300,000 healthcare workers have received it.

The World Health Organization told Reuters it was monitoring the situation and waiting for reports from the US and European regulators.

However, deliveries of the vaccine to EU countries started just 24 hours before J&J said it would pause the European rollout. As it has not been administered in the EU yet, experts there will be looking to the United States to see what their next move is.

The EU’s vaccine roll-out has been criticised by the WHO for being too slow, and there are concerns this latest delay could throw it into further turmoil.

The Johnson & Johnson vaccine is yet to be approved in the UK, although 30 million doses are on pre-order. The Department of Health said the rollout delay would not affect vaccine supplies in the UK or derail the aim to offer a jab to all adults by the end of July.

Canada has pre-ordered 10 million doses of the vaccine, and is “still on track” to receive the first shipment by the end of the month, said Prime Minister Justin Trudeau.

“But obviously, we’re following closely the developments in the United States,” he added.

In a joint statement, the FDA and the Centers for Disease Control and Prevention (CDC) said they were “reviewing data involving six reported US cases of a rare and severe type of blood clot in individuals after receiving the J&J vaccine”.

The statement said that this type of blood clot needed a different treatment than usual.

The common treatment – an anticoagulant drug called heparin – “may be dangerous”, it said.

Pending a further review, the FDA and CDC recommended “a pause in the use of this vaccine out of an abundance of caution”.

The joint statement said that “people who have received the Johnson & Johnson vaccine who develop a severe headache, abdominal pain, leg pain, or shortness of breath within three weeks after vaccination should contact their health care provider”.

Johnson & Johnson issued a statement saying that it shared “all adverse event reports” with the health authorities.

It added: “We are aware that thromboembolic events including those with thrombocytopenia have been reported with Covid-19 vaccines. At present, no clear causal relationship has been established between these rare events and the Janssen (J&J) Covid-19 vaccine.”

The US health protection agency has identified a very small number of the same rare form of blood clots seen in people given the AstraZeneca jab.

Governments around the world have cautiously begun to link these rare blood clotting incidents to the vaccine because of their unusual presentation – though this link hasn’t been definitively proven.

People suffering from them had very low platelet counts – blood cells that normally help repair damage in the body.

The Johnson & Johnson and AstraZeneca vaccines work in very similar ways. so in some respects, it’s not surprising they may cause similar side effects. And these appear to be comparably rare.

The numbers we’re talking about are so low that it’s difficult to say confidently what the risk of fatal blood clots is, but for the AstraZeneca jab, it has been estimated at one-in-a-million. There have been six cases out of 6.8 million doses of the Johnson & Johnson jab.

In contrast, Covid kills one in 1,000 infected in their 40s among those who develop symptoms (and this risk is much higher among older people).

Once you get into the youngest age groups, who are less likely to die from Covid, that risk calculus shifts, particularly when there aren’t too many infections in circulation.