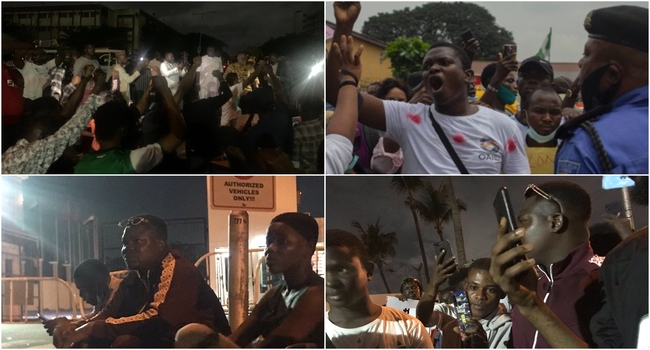 The last is yet to be heard of the calls seeking to disband the police Special Anti-Robbery Squad (SARS), as youths in Lagos stayed up late into Thursday night protesting that the unit be scrapped totally.

In recent times, the activities of the police unit have come under scrutiny and several members of the squad have been found guilty of using their position of authority to trample on the rights of citizens, especially the youths.

End SARS protests were held in various locations across Nigeria on Wednesday, however, while many thought the noontime demonstrations would be all for the day, a group of young people led by Mr Debo Adebayo, a comedian popularly known as Mr Macaroni, stormed the premises of the Lagos Assembly, asking that the lawmakers pass legislation that will see to the disbandment of the SARS unit in the Nigeria Police Force (NPF).

The youths decried the constant harassment encountered in the hands of SARS operatives, lamenting the rate at which many young creatives are being battered and killed by the ‘ruthless’ police officers in the squad.

Mr Macaroni and the other youths spent hours at the gate leading into the Lagos Assembly complex, seeking to see Governor Babajide Sanwo-Olu who they were told was as expected not in office at the time.

Officials and other members of the parliament tried to persuade the angry youths to leave and return at dawn, but they held their grounds and insisted that they would not leave till the number one citizen in Lagos addresses them and assures them that they would work to ensure and end if brought to the ‘menace’ that SARS has become in the country.

“If we say we want to see the one that we elected into office, it is not too much,” Mr Macaroni insisted while addressing an official of the Lagos legislature.

Not while I am alive!😭
#EndSARSProtest pic.twitter.com/6kHfLBoy9G

After a long while of waiting which tapered into the early hours of Thursday, the Speaker of the Lagos House of Assembly, Hon. Mudashiru Obasa, finally arrived at the scene to address the protesting youths.

Mr Obasa told the crowd that members of the parliament will hold an emergency meeting in the morning of Thursday to deliberate upon the #ENDSARS concerns.
He promised it will not be a deliberation by only the legislators, as the governor and all other stakeholders concerned will be at the meeting.

The speaker apologized for the ordeal that the youths have been through while staging their protest at the gates of the parliament, and assured them that a lasting solution will be found for the issues that have been tabled.

The Speaker, Mr Ajayi Obasa finally came out to address the protesters and PETITION was signed!!!!! pic.twitter.com/uSUF5C4nLc

All Road lights has been switched, we can't even see our faces again.. We don't know where this is going but we'll be here to find out#LagosProtestsAgain #EndSARSImmediately #EndSarsProtest #EndSARS @segalink pic.twitter.com/1fIZjWwDGS

Heartless killings and a 72-hour protest

The Special Anti-Robbery Squad (SARS) of the police force was put together to tackle robbery and crimes related to armed robbery within the country, but the unit has for quite a while been overreaching in its operations across the nation.

Without any legislation or order, the unit has morphed itself into some form of anti-graft agency, harassing many young Nigerians, especially men who spot dreadlocks and other forms of fancy head styles.

What would have been associated with culture and the arts, seemed to have been labeled a criminal act by SARS officials, one which operatives of the unit on routine patrols have reportedly tackled either by extorting various individuals or killing them in the name of attempting to arrest them for crimes that never get disclosed nor tried.

More often than not, encounters between men of the SARS unit and the civilian populace have ended in infringements of rights and a show of lawlessness on the part of those who swore to uphold the law and protect the citizens.

It is in an attempt to bring an end to SARS brutality that many Nigerians kicked-off a campaign via social media demanding that the squad be dissolved.

What seemed like a mere Twitter storm soon spilled over into the streets with countless youths in various parts of the country protesting and calling for an end to cruelty by SARS officials.

The latest protest in Lagos began in the early hours of Wednesday with a large crowd convening at the secretariat in Alausa within the Ikeja area of the metropolis.

While the protest in Lagos was going on, some other states states witnessed similar demonstrations, with celebrities, media personalities and ordinary citizens all lending their voice to the call for a total eradication of SARS operations.

In the wake of heated arguments and protests on social media, the Inspector-General of Police, Mohammed Adamu banned the personnel of the Federal Special Anti-Robbery Squad (FSARS) and other Tactical Squads of the Force from embarking on routine patrols.

He warned members of the tactical squads against the invasion of the privacy of citizens including  the “indiscriminate and unauthorized search of mobile phones, laptops and other smart devices”.

The IGP ordered members of the various units to concentrate and respond only to cases of armed robbery, kidnapping and other violent crimes when the need arises, an order for which the police boss was praised by different groups and individuals.

However, this stand by the IGP was and is not enough for the youths in Lagos, for though he vowed to see the SARS reforms through, the young people believe only a total scrapping of the unit will suffice in “bringing an end to the dangers posed” by its agents.

Determined to see to it that SARS becomes a thing of the past, the vivacious young men and women in Lagos staged the ongoing protest which some say may last up to 72 hours (three days).

Our sleeping space is being set up!#EndSARSProtests!

Omo, it seems like @mrmacaronii is staying the night o because 🥺🥺 pic.twitter.com/oyXVaIeGxP

No Tents!
No Chairs yet!
But Dear Nation, we will sleep on the ground!
We are not here to joke!#EndSarsProtests pic.twitter.com/7RLxwyyBZe