Veteran journalist, Dele Momodu, Has reacted to the dethronement of Emir of Kano, Muhammadu Sanusi II.

Momodu claimed that the Kano State Governor, Abdullahi Ganduje and his “co-conspirators” got their pound of flesh by dethroning Sanusi.

Recall that the Kano State government had on Monday announced the removal of Sanusi as the Emir of Kano.

The State Secretary to the Government, Usman Alhaji, had explained that Sanusi’s total disrespect to lawful instructions from the government and the lawful authorities was responsible for his dethronement.

Reacting, the Publisher of Ovation Magazine reminded Ganduje and his allies that power is transient and not permanent.

In a series of tweets, Momodu wrote: “I hope now that GOVERNOR GANDUJE and his co-conspirators have taken their pound of flesh by dethroning the Emir of Kano, their eyes will clear and see later that their own power too is transient!

“No matter the sins of Emir Sanusi, he is one of the finest citizens of Nigeria. IJA ILARA KO TAN BORO, A NJUWON KO SE E WI LEJO.

“Nothing beclouds reasoning than envy! The last time SANUSI was booted out as Central Bank Governor, he soon became the Emir! Who knows where God is taking him next… God’s ways are mysterious… Allah Akbar!” 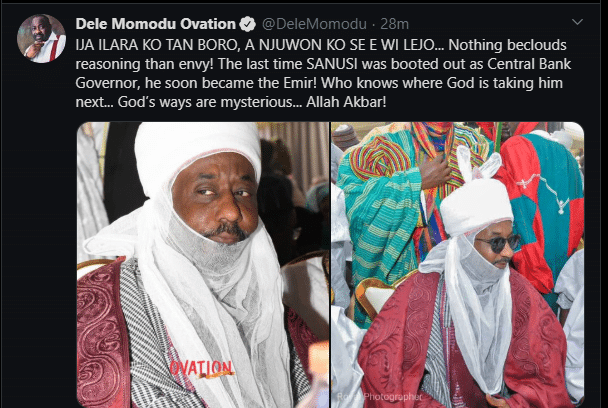