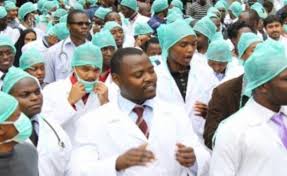 Kaduna State government has warned against the planned strike by the Congress of Health Workers Unions and Associations in the State.

The State government has, therefore, introduced a register to be signed by those willing to work with the government, despite the salary-cut.

Mr Muyiwa Adekeye, Special Adviser to the governor on Media and Communications in a statement said government would not be misled into granting health workers a special status amongst public servants.

Recall that the Congress of Health Workers Unions and Associations in Kaduna had in a communique among other things, demanded the refund of the 25 percent of their salaries that were cut-down by the state government and the provision of Personal Protective Equipments, failure which will lead to a strike.

But the State government in its response, said the government rejects the strike threat and would regard persons who fail to show up at their assigned places of work as having forfeited their employment.

The government emphasized that, “Every health worker that is willing to work is required to sign the register at the Ministry of Health and the health institutions to which they are deployed.”

The government explained that it would keep its health facilities running and protect staff that are willing to work, insisting the Ministry of Health has been directed to ensure that health facilities run and provide services to the public, with the support of willing workers who must be offered every assistance and protection.

The government in its official response to the strike notice by health workers stated that it would not yield to blackmail.

The statement added, “it is instructive that the strike action was announced on the same day that many health workers were showing evidence on social media of the N450,000 they had received as April 2020 incentive.

It said the state government would not be misled into granting health workers a special status amongst public servants, stressing that the consequences of concessions made along such lines by previous governments had created a sense that some public servants are more precious than others.

It explained, “Government will not be browbeaten by strike action into excluding health workers from the sacrifices being made by other public servants who are donating 25% of their salary to fund the provision of palliatives for low-income, poor and vulnerable persons that are impacted by the lockdown.”

For the avoidance of doubt, it said, “the salary deductions introduced in April 2020 apply to everyone who works for KDSG, from the Governor to the most junior civil servant with a take-home pay of more than N50,000 monthly.”

It added that it does not favour or discriminate against any professional group in the public service, saying that “it is comprehensive show of solidarity and applies to everyone employed by the government, and therefore does not exclude health workers.”

It explained that health workers are being paid additional amounts as part of an Occupational Safety Initiative as High risk staff and that they are receiving a compensation of N15,000 per day, stating that it refers to all cadres of personnel who are in close contact with Covid-19 patients.

“Low risk staff are receiving N5,000 per day. These classifications were done by the Emergency Operations Committee on which health professionals, including the NMA, are amply represented.”

The statement noted that the government is also paying a monthly incentive of 10% of net pay to each and every health worker in its hospitals and primary health centres.

It added that in addition, the Kaduna State Government has paid premiums for an enhanced insurance package for health workers, and raised the death and disability benefits to N5m and N2.5m, respectively.

It explained that the insurance package also includes payment of N100,000 per day for 10 days to health workers who get infected with Covid-19.

It explained that the state government regards the other demands made as mere smokescreens to cover the first one.

“Asking the state government to treat the over 11,000 persons working in the health sector as frontline staff and pay them as such is not a serious request. There is a global shortage of PPEs, but amidst these supply-side difficulties, the state government consistently tries to keep its secondary health facilities supplied.

“Expanding health sector resilience and capacity to improve access to health services is a cardinal goal of this government. In pursuit of this objective, the government has recruited more health workers, improved health facilities and implemented initiatives of social inclusion like the Contributory Health Insurance Scheme and the supply-chain transformation project of the Kaduna State Health Supplies Management Agency (KASHMA),” the statement explained.