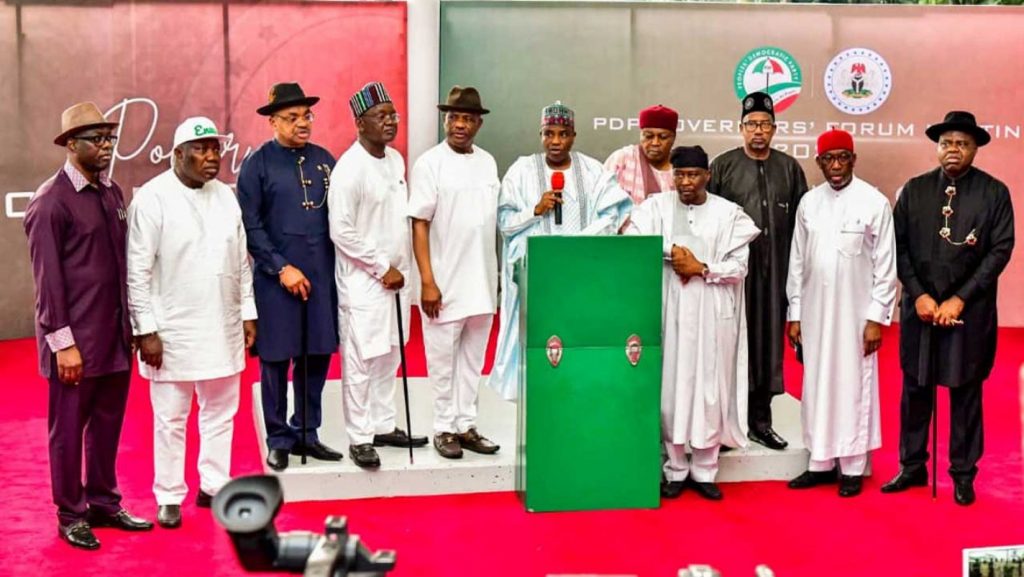 As the National Assembly resumes plenary today after the Yuletide break, governors elected on the platform of the opposition Peoples Democratic Party (PDP) rose from a meeting in Port Harcourt, Rivers State, yesterday, with a charge to legislators not to sustain President Muhammadu Buhari’s veto of the Electoral Act Amendment Bill 2021.

They asked the lawmakers to quickly conclude deliberations on the bill, either by overriding the President’s veto or deleting areas of complaint, and “deny President Buhari the opportunity to once again truncate a reformed electoral jurisprudence for Nigeria.”

In a nine-point communiqué released after the meeting that lasted for about eight hours at the Government House, Port Harcourt, which was signed by 10 of the 13 PDP governors, they re-echoed Sunday’s position of the former chairman of the Independent National Electoral Commission (INEC), Prof. Attahiru Jega, that the early conclusion of the Electoral Act amendment is vital for credible elections.

The opposition governors also lamented “the continued state of insecurity in the country, persistent and ceaseless flow of Nigerians’ blood on a daily basis in many parts of the country and the near collapse of security situation.”

They expressed regrets that “Mr President is unwilling, from his recent comments discountenancing the proposals for state policing, to participate in reviewing the structural problems of tackling insecurity in Nigeria and urged Mr President to reconsider his position and consider decentralisation and restructuring of the security architecture as the most viable solution, together with proper arming, funding and training requirements for security agencies.”

The governors also noted that “the economy has continued to deteriorate,” adding that “Nigerians have become numb and accustomed to bad economic news as exemplified by the inconsistent and differential exchange rate regime, high interest rates, unsustainable unemployment figures and borrowing spree, among other bad economic indicators.”

Speaking earlier at a gala night event, Ayu boasted that the party would produce the next president of the country, as he urged Nigerians to keep faith with the party.

MEANWHILE, a coalition of Civil Society Organisations (CSOs), working for the perfection of the electoral system, have regrouped in Abuja with a call on the legislature and President Buhari to conclude the process of the Electoral Act Amendment Bill by January 31, first by retransmitting the bill to the President for assent latest by Friday, January 21, and for President Buhari to assent to the bill within one week.

According to them, the opportunity to test the operability of the new legislation and functionality of the new innovations would be lost if the amendment process was not concluded expeditiously.

The CSOs, who raised the issues during a press conference in Abuja, yesterday, also warned that further delay on the conclusion of the Electoral Act amendment process was inimical to the preparations for Ekiti and Osun off-cycle governorship elections, the 2023 general elections and future elections in the country.

“The National Assembly should ensure proper scrutiny of the bill to resolve all drafting errors and cross-referencing gaps before re-transmitting the bill for Presidential assent. The President should upon receipt of the re-transmitted bill provide his assent within a week,” the coalition said.

Itodo informed the lawmakers that Nigerians expect that work on the electoral bill will be the priority issue on the order paper today, warning that any further delay will undermine public confidence in the reform process.

He urged the National Assembly to remove the contentious clause of direct primary, resolve all identified drafting errors and cross-referencing gaps and re-transmit the bill to the President for assent within a week of resumption.

THE Senate has, however, promised that the red chamber will collate opinions of senators after consultations with their constituents over the controversial issue of direct primary. Senate Leader, Senator Yahaya Abdullahi, gave the indication while fielding questions from journalists at the National Assembly complex in Abuja, yesterday.

Abdullahi said whatever position that would be taken on the controversial bill would be in line with the provisions of the 1999 Constitution as amended, stressing that he cannot predict what the final decision of lawmakers will be on the bill.

“Senators have consulted with their constituents and the outcome of their discussions will be reflected during debate on the floor of the Senate.”

He also indicated that the resumption for legislative duties will enable the Senate interact with the House of Representatives on the way forward over the stalemate in the electoral act bill.

President of the Senate, Senator Ahmad Lawan, had said the Senate would consult with the House of Representatives on how to respond to President Buhari’s decision to withhold assent to the Electoral Act (Amendment) Bill passed by the National Assembly.

According to the Senate President, the provisions of the 1999 Constitution (as amended) does not permit the upper chamber to exclusively take any action on such matters in the absence of the House of Representatives, since the latter had then vacated for Yuletide recess.

APART from stakeholders calling on the lawmakers to prioritise action on the enactment of the rejected electoral bill, they also want the legislators to expedite action on legislations that seek to address the deteriorating security situation in the country and provide the needed interventions that would tackle the socio-economic woes of Nigerians

The House of Representatives has particularly been asked to accelerate the process of review of the 1999 Constitution for which zonal public hearings were held last year, step up oversight of Ministries, Departments and Agencies (MDAs) and ensure self-transparency and accountability by making details of its budget public.

The National Assembly, particularly the House of Representatives, had embarked on Yuletide break on December 21, the day President Buhari’s letter rejecting the Electoral Act Amendment Bill was read on the floor by the Speaker, Femi Gbajabiamila. But Gbajabiamila had assured that the lower chamber would resume deliberations on the rejected bill.