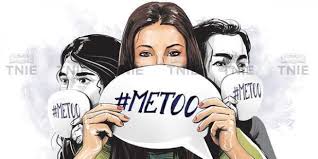 Social media has become a new and dangerous battleground for women’s rights in Egypt after young TikTok influencers were jailed while a resurgent #MeToo movement decried male sexual violence.

International digital rights group Access Now described them as “all women, all young, all exercising their right to freedom of expression online”.

Just two days later, a court sentenced another young social media influencer, Manar Samy, to three years in prison over TikTok videos, deeming the clips in which she dances and lip-syncs to popular songs to be “inciting debauchery”.

Many in the deeply conservative country have cheered on the arrests, as traditional social values clash with online content seen as racy and sexually suggestive.

“The Egyptian government is on a campaign to arrest and prosecute women influencers on… TikTok for violating ‘the values of the Egyptian family’ and ‘inciting debauchery and immorality,’” Access Now said in a statement.

The Egyptian authorities “not only want to control what citizens say, but also how they should dress, talk, and behave online,” said Marwa Fatafta, the group’s Middle East and North Africa policy manager.

– ‘Stronghold on the internet’ -Egypt has in recent years enforced strict internet controls as it walks a tight line between balancing the Islamic law that shapes its governance and adapting to a rapidly shifting society with a penchant for social media content.

Stringent laws were approved in 2018 allowing authorities to block websites seen as a threat to national security and to monitor personal social media accounts with over 5,000 followers.

“In the past, the Egyptian regime tightened its stronghold on the internet… Now, the online repression extends to non-political activity too,” said Fatafta.

The six jailed women combined have millions of followers.

Hossam was arrested after posting a clip saying that girls could make money by working with her, a message that was interpreted as a call for prostitution, while Adham had posted satirical videos on TikTok and Instagram.

Aside from being a virtual battleground of competing interpretations of morality, social media has also empowered young Egyptian women to speak up about sexual assault, sometimes with negative consequences.

In May, a shocking video came to light of a young woman sobbing, her face battered and bruised.

Menna Abdel-Aziz, 17, posted an Instagram video in which she said she had been gang raped by a group of young men.

The authorities’ response was swift: the six alleged attackers were arrested — but so was Abdel-Aziz. All were charged with “promoting debauchery”.

“She committed crimes, she admitted to some of them,” the prosecutor-general said in a statement. “She deserves to be punished.”

– ‘More to come’ -Since Abdel-Aziz’s case surfaced, a revived #MeToo movement among Egyptian women, mostly from affluent backgrounds, has sprung into action.

A gang rape allegation made in late July stemming from a prominent social media account has been one trigger.

Another was young women posting testimonials about sexual misconduct that led to the arrest earlier in the month of Ahmed Bassam Zaki, 22, a former student of some of Egypt’s most elite schools and universities.

But the movement faces an uphill battle.

Rights groups say the government of President Abdel Fattah al-Sisi has been curtailing freedoms since he took office in 2014.

Comedians, academics, bloggers, journalists, political dissidents, lawyers and activists are among those who have been jailed in recent years, and a music video director has died in custody.

Imprisoning social media influencers, the latest group to be targeted, “has nothing to do with protecting social values. It’s about internet policing and control,” Access Now’s Fatafta said.

“With the massive increase in content creators and influencers on TikTok in Egypt, there is a high risk that more prosecutions targeting this community are yet to come,” the organisation added.