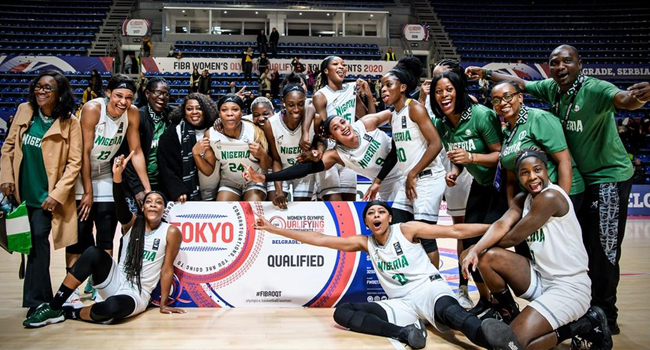 Share
Facebook Twitter LinkedIn Pinterest Email WhatsApp
D’Tigress forward, Evelyn Akhator believes the Nigerian senior women’s basketball team will return stronger when the Covid-19 pandemic is over.
In February this year, the African champions booked a ticket to the 2020 Olympics Games in Tokyo despite losing 64-70 to host-Serbia in their second group game at the FIBA Olympic Games Qualifying Tournament.
In an interview with Channels Sports, Akhator confirmed the team was looking forward to competing at the Olympics and the postponement will not affect their approach to the tournament.
“It’s all about us, it’s our zeal and it definitely won’t die off. We have the zeal, it’s the energy, and we will bring the energy. Last week we had a zoom meeting and everyone was just happy, seeing each other once more and that’s the energy I’m talking about so when we come together there is a different vibe, a different energy and I think it’s definitely going to be there,” she said.
The two-time women’s Afrobasket champion sees the pandemic as a blessing in disguise for basketball in Nigeria. She charges the federation to use this period to plan adequately for the Tokyo Olympics.
‘’It has actually given the federation more time to prepare us financially. I think that’s something we really need to be able to do better, even as a people, the financial aspect of it, if we have the financial means that will really motivate us.’’
With the growing uncertainty that the coronavirus outbreak has dumped on sporting events worldwide, the energetic forward hopes the restrictions will be lifted so she can get back to France and get down to club action with Flammes Carolo.
”I’m just waiting till September.  But we communicate, my coaches, the team doctors everybody communicate through WhatsApp. So I’m just trying to prepare for the new season.’’
With COVID-19 ravaging the world, Akhator believes this is the time for everyone to come together, show love and care particularly to the vulnerable members of the society.
”For me personally, I have been trying to give as much as I can. Basketball players don’t have as much as footballers, but we try to give as much as we can and I have been doing give away for my fans, and right now courtesy of my foundation I will be giving out face mask because we all need to wear a mask.
“I know it’s not going to be easy but it’s now the new normal and I know it’s difficult for some people to embrace this so I’m doing that with my foundation and will also give out foodstuffs to the vulnerable,’’ she concluded.
Share. Facebook Twitter Pinterest LinkedIn Tumblr Email WhatsApp