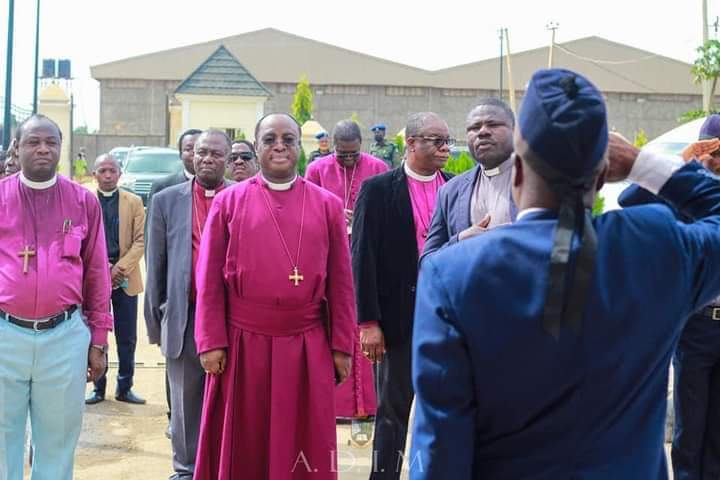 The Diocese of Ifo (Anglican Communion) from Wednesday, 13th to Thursday, 14th October, 2021 played host to the Bi-Annual Provincial Council Meeting of the Ecclesiastical Province of Lagos.

The meeting which was presided over by the Archbishop-elect of the Province and Bishop of the Diocese of Lagos, the Most Rev’d Dr. Humphrey Bamisebi Olumakaiye was the second of its kind in the year, the first having been held in the Diocese of Ijebu North in April 2021. This meeting was equally the first meeting the Archbishop would preside over since his election as Archbishop in the month of September, 2021. Before this election, the Most Rev’d Dr. M. Olusina Fape whose tenure came to an end in July 2021 had been the Archbishop and Chairman of the meeting.

Arriving at the King’s Court, Itori, Ewekoro Local Government area of Ogun State; a palatial hall owned by the Olunla of Itori, Oba Abdul-Fatai Akorede Akamo on Wednesday, 13th October, 2021 the Archbishop and Bishops of the Province were welcomed by Officers and members of the Anglican Communion Brigades (ACB) in the Diocese of Ifo. A Guard of Honour was mounted by the Brigade for the Bishops. Other activities for the day included the Episcopal meeting and Dinner Night with the Olunla of Itoriland.

The Council meeting itself was held at Cathedral of the Holy Trinity, Okenla Ifo, Ogun State. In attendance were both clergy and lay representatives as well as Bishops in the 13 Dioceses in the Province of Lagos. The host Bishop, the Rt. Rev’d Nathaniel Oladejo Ogundipe preached and celebrated at the Holy Communion Service before the meeting proper.