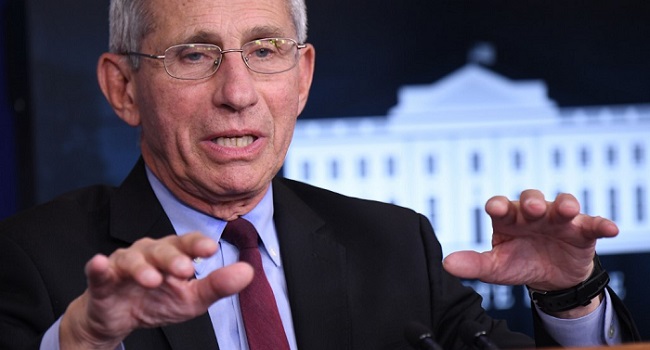 The top US health and infectious disease specialist says the key to reopening professional sports leagues in America is to have the athletes play games in front of empty stadiums.

Anthony Fauci, who is helping coordinate the US response to the global coronavirus pandemic, said reliable antibody testing and fast results are also crucial to the return of sports.

“There’s a way of doing that,” Fauci told US Snapchat show “Good Luck America.” “Nobody comes to the stadiums. Put (athletes) in big hotels, wherever you want to play.

“Keep them very well-surveilled, but have them tested like every week and make sure they don’t wind up infecting each other or their families, and just let them play the season out.”

Professional sports leagues are in gridlock due to the pandemic that has so far killed nearly 28,000 Americans.

The National Basketball Association is pondering a similar model for getting their 2019-20 season restarted in either Las Vegas or the Bahamas.

The PGA is reportedly considering a return on June 11 without fans in attendance, starting with a tournament in Fort Worth, Texas, which was originally scheduled for the weekend of May 21-24.

The matches would not be played in front of fans, and the PGA may have to play on gallery-free courses for at least the months of June and July.

Eight Tour events were postponed on March 17. The PGA Championship and Masters were rescheduled for later in the season.

Major League Baseball’s 2020 season, which was due to start March 26, is on hold, as is the LPGA tour and motor racing, while the National Football League is just hoping it will be able to start its season on time in September.

“That is the opposite of social distancing, so I think it could take quite a while.”

Los Angeles Mayor Eric Garcetti said Monday that his California city might not host large gatherings, such as sporting events and concerts, before 2021.

“It would be very difficult to see that,” Garcetti said when asked if events would resume in this calendar year.

Also, Jeffrey Smith, the chief executive for Santa Clara County in northern California, told ESPN that more people will die if events are staged too early and that only a “major miracle” could lead to the 2020 NFL season starting on time.

“It puts the entire country at risk,” said Smith, who overseas the area that includes the NFL’s San Francisco 49ers and the NHL’s San Jose Sharks as well as several US college teams.

“The fundamental thing is sports is not a local event. If you have people travelling from all over and you have no way of knowing whether they’re infected or not — I mean, 50,000 of them in a stadium is not a good idea.”