COVID-19: From Wall Street To Bethlehem, Iconic Sites Reopen Across The World 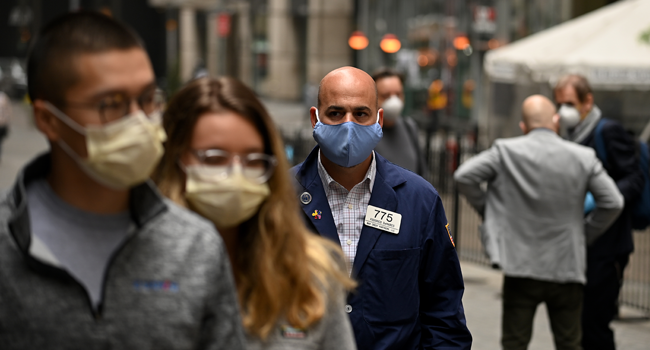 Iconic world sites from the New York Stock Exchange to the Church of the Nativity reopened their doors Tuesday from the coronavirus pandemic, but new alarm bells rang in Latin America over a spike of infections.

In a symbolic return of a high altar of capitalism, the New York Stock Exchange — which had gone exclusively virtual for two months — allowed a limited number of traders to return to the trading floor, wearing masks to reduce the risk of infection.

The reopening boosted the mood as the benchmark Dow Jones index surged more than 2.2 percent, casting aside grim predictions that the world could be entering a new Great Depression after millions of job losses.

“Let’s do something creative, let’s do it fast. Let’s put Americans back to work,” Cuomo told reporters.

There were also signs of hope at some of the world’s best-known destinations including the Church of the Nativity in Bethlehem, built on the spot where Christians believe their saviour Jesus was born.

The church’s opening “gives hope to the world that this pandemic will end,” said Rula Maaya, the Palestinian tourism minister.

The illness has killed more than 346,000 people worldwide and forced most countries to mothball their tourism industries, a crucial source of revenue.

In Italy, the global epicenter of infections after the virus spread to Europe from China, the site of a previous natural disaster also reopened to visitors — the ruins of the Roman city of Pompeii, destroyed by a volcanic eruption in 79 AD.

But the site, which attracted four million visitors last year, was largely deserted as foreign visitors are still banned from travel to Italy until next month.

“It’s only us guides, and journalists,” sighed 48-year-old Valentina Raffone, noting a “sense of emptiness, of sadness” as if after a disaster on the scale of the city’s end.

Italian Foreign Minister Luigi di Maio said he was working with EU colleagues to agree on June 15 as a coordinated day for member states to reopen their borders.

“We should save what we can save of the summer, to aid our entrepreneurs,” he said.

The Vatican too has relaxed its lockdown, announcing that Pope Francis will address the faithful once more from his window overlooking Saint Peter’s Square on Sunday.

And Russia said it had passed its peak of infections, promising to hold postponed World War II victory celebrations next month.

“The risks for all participants should be minimized, or even better, eliminated,” President Vladimir Putin said.

His announcement came as Russia recorded its highest daily coronavirus death toll of 174, with a caseload of 362,342, the third-highest number of infections in the world after the United States and Brazil.

There was no mistaking that the coronavirus was taking a growing toll in South America.

With about 730,000 cases — out of 5.5 million globally — Latin America has outpaced Europe and the United States in the number of daily infections.

“In South America, we are particularly concerned that the number of new cases reported last week in Brazil was the highest for a seven-day period, since the outbreak began,” said Carissa Etienne, director of the Washington-based Pan American Health Organization.

“Both Peru and Chile are also reporting a high incidence, a sign that transmission is still accelerating in these countries,” she said at a weekly briefing.

Latin America’s largest airline LATAM, which has more than 42,000 employees, became the latest carrier to file for bankruptcy as COVID-19 devastates aviation.

Virus countermeasures have been especially politicized in Brazil, whose right-wing president, Jair Bolsonaro, has downplayed the illness and lashed out at state governors who have asked people to stay at home.

Police on Tuesday raided the official residence of one of Bolsonaro’s leading critics over the coronavirus response, Rio de Janeiro Governor Wilson Witzel, alleging that he embezzled public funds for the virus.

Witzel called the raid “political persecution” and warned: “What happened to me is going to happen to other governors who are considered enemies.”

Controversies surrounding the coronavirus have intensified around the world. In Britain, Prime Minister Boris Johnson is in crisis mode after his top aide, Dominic Cummings, flouted the government’s lockdown by taking a cross-country trip during the lockdown.

Douglas Ross, a minister for Scotland, resigned in protest, saying of families who could not mourn loved ones during the lockdown: “I cannot in good faith tell them they were all wrong and one senior advisor to the government was right.”

US President Donald Trump, an ally of both Johnson and Bolsonaro, has weathered a torrent of criticism for playing golf as the death toll in his country neared 100,000 on the weekend and for not wearing a mask in public.

With barely five months before elections, Trump is eager to show a return to normal in the United States and tweeted Tuesday of the surge on Wall Street that the “Transition to Greatness has started.”

European Commission President Ursula von der Leyen is set on Wednesday to unveil her own trillion-euro proposal to revive the economy of the bloc, whose leaders are likely to argue over its details.

With the search for a vaccine potentially still in its infancy, the World Health Organization was left to ponder a very different development on Tuesday.

Two Dutch workers seem to have caught the disease from minks, which “would be the first known cases of animal-to-human transmission,” the UN health agency said.

The agency said pet owners should take precautions but there was “no reason or justification to take measures against companion animals.”