PREAMBLE:The Standing Committee meeting of the Church of Nigeria (Anglican Communion) which was held from Monday, 8th to Friday, 12th February, 2021, was presided over by the Most Rev’d Henry C. Ndukuba, Archbishop, Metropolitan and Primate, Church of Nigeria (Anglican Communion), accompanied by his wife and National President of the Mothers’ Union, Mrs. Angela Eberechukwu Ndukuba, attended by 153 Bishops, 155 Clergy, 72 Lay delegates and 241 delegates of the Mothers’ Union. The Standing Committee received Guests at its Opening Ceremony, including the Governor of Anambra State, His Excellency, Chief Dr. Willie Obiano, represented by His Excellency Dr Nkem Okeke, the Deputy Governor; His Excellency Peter Obi, former Governor of Anambra State, Her Excellency Dame Virgy Etiaba, first female Governor in Nigeria and other prominent dignitaries.

THEME: COSTLY COMMITMENT: THE IMPERATIVE IN FOLLOWING JESUS CHRIST (LUKE 9: 23 – 27): The Theme is a reminder to the faithful that the calling of the church and its members requires absolute and sacrificial commitment devoid of any distraction in following Christ. This calls for total submission to the Word of God and leading of the Holy Spirit, requiring God’s people to deepen their personal and corporate commitment to the Lord Jesus in such a way that their lives are totally rooted and built up in Christ. Believers are reminded to be mindful of their calling not to compromise their faith and not to allow the pleasures of the present time to distract them from following in the will of God. This is important in the age in which Christianity now appears to be a bread and butter issue, especially given the prevailing Prosperity Gospel of our day. The Christian calling requires commitment in carrying the Cross whatever that may bring. The present day situation in Nigeria is frail and Christians are called to be dedicated and committed to their calling without fail.

COVID-19 AND PUBLIC HEALTH:  The Church commiserates with those who have lost their loved ones to the deadly global pandemic and commends the courageous health workers attending to infected members of the public at great risk to their own health. The Standing Committee appeals to the Government to exercise strict control over the importation of vaccines to avoid adulteration and racketeering of the product. The Church encourages the citizens to comply with Government recommended actions at stemming the tide of the ravaging pandemic. It urges the Government to give serious attention to the health sector following the Pandemic that has exposed the weakness of the sector, in order to prepare for any unforeseen similar future occurrence.

ENDSARS PROTESTS:  The Standing Committee laments the unfortunate hijack of the protests by hoodlums which resulted in the destruction of properties, untold hardship on the masses, and sadly, loss of lives. It commends the efforts of some State Governments in establishing the Panel of Inquiry into the ENDSARS Protests, with Lagos showing a good example. It urges the Government to ensure that the Panel completes its Inquiry and the delivery of its report before the Lekki Gate is returned to its managers. It further calls that the handling of the ENDSARS protest should not become an opportunity for witch-hunting and blame game. Those who have been sanctioned for participating in the legitimate protest should be relieved of such actions such as the seizure of their international passports, while all Court orders must be respected and obeyed including the unfreezing of accounts of those linked with the protest as is befitting of modern democracy. It calls on Nigerians in general and members of the security agencies in particular to be responsible in the use of their positions in handling the Nigerian people.

NIGERIA AND INCESSANT INDUSTRIAL ACTIONS: The Standing Committee laments the incessant industrial actions that leave our tertiary institutions closed for a long period of time and thus disrupt their academic calendar. It calls for sincerity between Government and Union leaders, for agreements to be honoured and implemented, and for workers’ welfare to receive adequate attention, so that the education of our youths, and indeed their future, is not jeopardized.

INSECURITY: The Church is concerned about the spate of attacks and insecurity that now characterize the Nigerian State. That the Fulani herdsmen operate with such arrogance and disregard for their host communities and the safety of people in particular is a red flag, indicative of the precarious state of the nation.  It commends the Federal Government for finally yielding to the yearnings of the masses in appointing new Service Chiefs. It calls on the new Service Chiefs to focus on eradicating the insurgency and bring lasting peace to the land. The church appeals to all and sundry to work together to support the efforts of the Service Chiefs in dealing with all forms of insecurity in our land and ensure the safety of the precious lives of the citizens.

SECOND NIGER BRIDGE: The Church commends the Federal Government on the construction of the Second Niger Bridge, whilst appealing for speed to see that the work is complete in record time.

APAPA WHARF:  The Church notes with utmost concern the gridlock at the Apapa Port with its untold hardship on the people. It calls on the government to speedily reopen other ports and make functional to reduce the pressure on Apapa Port.

NATIONAL IDENTITY NUMBER: The Standing Committee notes with utmost concern the difficult circumstances under which Nigerians are being asked to register for their National Identity Number in a way that the protocols of the Pandemic are being compromised. It appeals to the Government to always ensure that such programmes are planned with consideration for the people so that their human dignity and health are not compromised. Such things should always be done with little difficulty for the Nigerian people while there should be many centres so that people are not subject to strenuous movements and travelling before they can register.

ECONOMY: The Church is worried about the bad state of the Nigerian economy with its attending harsh effects on the citizens. It recognizes the Government’s efforts at helping those at the lower level of the economic ladder through its survival funds scheme. It appeals to the Government to do more to improve the national economy by diversifying and creating more employment opportunities for the teaming population of its youths, for a long lasting impact. Governments at all levels should provide robust and hitch free enabling environments for small and medium enterprises to thrive.

ELECTION: The Standing Committee calls on Christians and citizens of Anambra State to take active part in the electioneering of the forthcoming gubernatorial election. It encourages believers to play an active but responsible role in the election. It calls on Nigerians to register in any party of their choice and be involved in party activities from the grassroots to national levels.

CONCLUSION: The Standing Committee calls on all Christians to show dedication and personal commitment that is both sacrificial and genuine, looking beyond self-gain that now characterizes the common approach to faith. This manifests in both Nigerian politics and Church as people have become more concerned with selfish motives and corrupt practices. 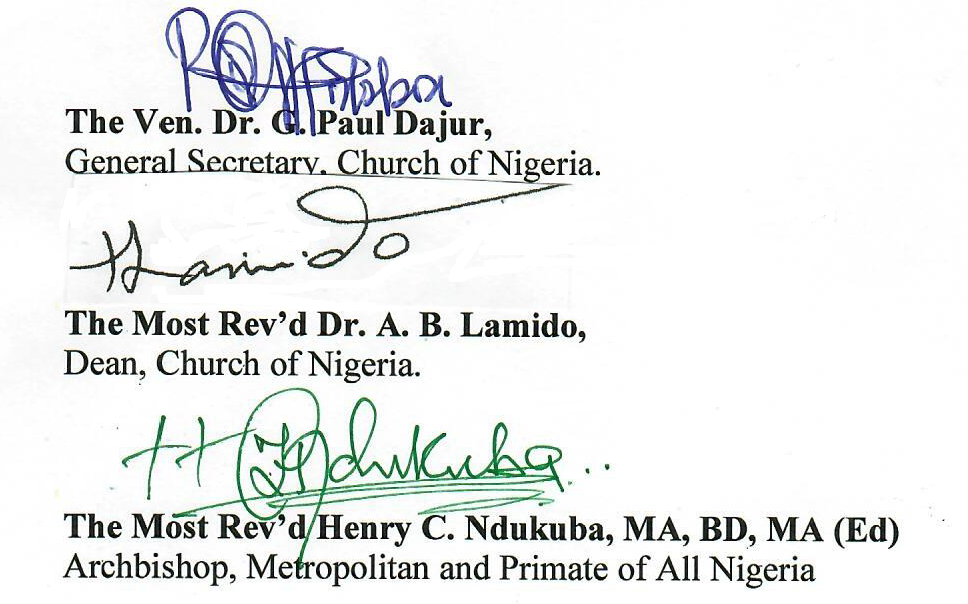 Pdf Link: COMMUNIQUE OF THE STANDING COMMITTEE OF THE CON

PASTORAL LETTER FROM THE STANDING COMMITTEE OF THE CON