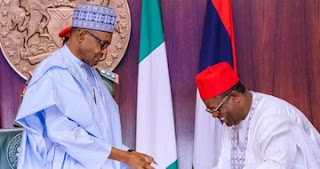 Governor Dave disclosed this when he briefed State House Correspondents at the end of a closed door meeting with President Muhammadu Buhari at the Presidential Villa, Abuja, on Monday.

He revealed that the project is ready for inauguration by the president in November include roads, medical centres, malls, bridges, among others.

The governor commended Buhari for the execution of mega projects in the South-East, saying the projects would have a great impact on the people of the region.

He said: “I came to see the president and to thank him for the number of mega projects that he is doing in the South-East.

“The Second Niger Bridge is fast becoming a reality. Each time we visit that bridge location, it is always like a dream and so we the people of the South-East are very grateful to the President for this.

“We also thank him for the award of the Eastern corridor of the railway line. This is a project that is going to fast track commercial activities of our people.

The governor also lauded the president for introducing a fertilizer programme that would help the country attain food sufficiency.

“Let me point out that without the effort of President Buhari through this fertilizer initiative and other programmes in the agricultural sector, it would have been a very difficult time for this country.

“And so, that project is supposed to produce a large set of granules to enable us to produce fertiliser to serve the South-South, South-East and parts of North-Central.

“Mr President has already approved the funds and released them to the Solid Mineral Development Fund. But part of the requirement is that there must be SPV integration or private sector initiative.

“They have applied to Mr President for approval through the chief of staff. So we had to remind Mr President,” he said.

On the continuous adherence to the sit-at-home order by the proscribed Indigenous People of Biafra (IPOB) by the citizens of the state despite its suspension, Umahi identified fear of the unknown as reason for the citizens’ action.

He said: It is a question of fear… You know, the easiest thing to do is to carry weapon and kill somebody, and that’s what happened in the past.

“And that’s why some people in South-East are afraid of coming out. Even if you go now to the street and you hold AK 47, people will desert the street.