Bronze Casters In Benin Protest Over Ownership Of Stolen Artefacts 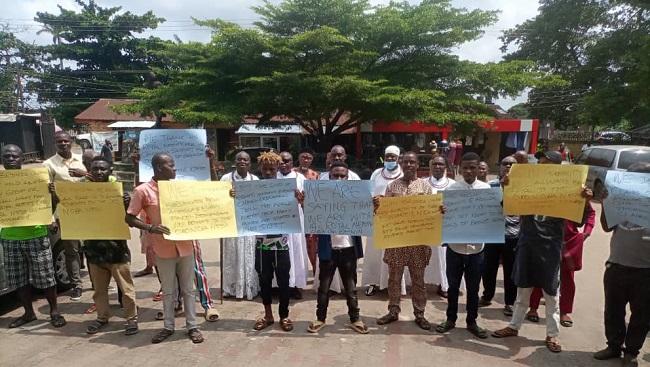 The controversy over the proposed return of the Benin artefacts stolen during the invasion of the old Benin Empire in 1897 by the British military forces, got messier on Monday as the Igun Bronze Casters Guild, who claimed to be descendants of Igun Community, staged protests across Benin City and visited the palace of the Oba of Benin and the Edo State Secretariat of the Nigeria Union of Journalists, over the claim by another group known as Igun-Igbesanmwan-Owina Descendants Cultural Movement to the ownership of the artefacts.

The Igun-Igbesanmwan-Owina Descendants Cultural Movement, based in Europe and America, had in advertorials in some conventional and social media platforms last week, claimed part ownership of artefacts, insisting that they must be part of negotiations for their return.

But the protesters led by the Ine of Igun, Chief Osarenren Inneh and other chiefs, the Igun Bronze Casters Guild called on security agencies including Interpol to help fish the signatories to the said advert insisting that from time immemorial, they cast the bronze artworks for the palace and they remain the property of the palace.

“We have never in any way been the owners of the artefacts that we were ordered to do by the palace. There is no member of this Igun that will say that as at 3000 years ago, they can buy a kilo of manila so all the works that were done, were done inside the palace and were done for the monarch. We do works for the beautification of the palace, we do works to keep the history of this kingdom in form of plaques and art forms so we duplicate the history of the kingdom,” Chief Inneh explained.

According to him, “We have never in any way been privileged to do these works for ourselves until when we were given our royal charter in 1280 AD by Oba Oguola. They gave us that charter for commercial purposes and these artefacts were long in existence even before the royal charter.”

Pledging loyalty to the Benin Place, Chief Inneh said, “We see those publications as false and we want to disassociate ourselves from anything that has to do with that association because it did not come from us. We are servants to the palace, we are servants to the Omo N’Oba and nobody should pitch us against the palace because we cannot go against the palace. We are grateful to Omo N’Oba for all he has been doing for us over the years.”

“Those who thrive in making mischief just for the fun of it had better be warned to look elsewhere for their game. For sure this new chapter will not end well with them,” he admonished.

“And to sum up our submission, we wish to call on the security agencies, especially Interpol operatives, to spread their dragnet to get the real identities of the writers and sponsors of the letter who hide under what we equate to be false identities to perpetrate falsehood and character assassination their stock-in-trade,” he reiterated.