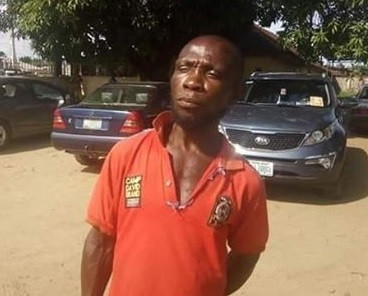 Narrating her ordeal, the JSS 1 student, who broke down in tears, said her father forcefully had sex with her mainly at night, on a daily basis.

“My father forcefully abused me sexually beginning from January 2020, this occurs almost on daily basis, irrespective of my resistance due to pains and injury I sustained from the ungodly act. first I reported the case to my step mother who confronted my father but she was beaten and this led her fleeing from my father’s house,” she narrated.

“When the incidence was becoming unbearable to me, I ran and reported to the police which led to his first arrest but due to the intervention of my aunty, who did not believe my story,he was released on bail. After his released from the police cell,I did not have any option than to return to the house and stay with my father. The matter grow from bad to worst, it was the darkest moment in my life, this time my father did not allow me to sleep,he forcefully abused me through out the night,it was coming on daily basis. Since nobody was there to help,I decided to run away from my father’s house to an unknown destination, only to find a compassionate mother, Mrs Bright Archibong, who rise to fight on my behalf”