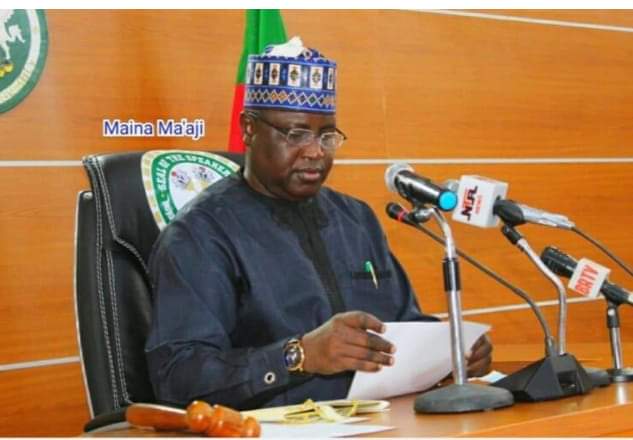 The Speaker of the Borno State House of Assembly, Rt Hon Abdulkarim Lawan has faulted the claim made by the Minister of Information, Lai Mohammed and Gen Gabriel Olonisakin, the immediate past Chief of Defence Staff (CDS), that all the 27 Local Government Areas in the state have been liberated from the stronghold of Boko Haram.

Lawan who faulted the claim on Monday while speaking at a Concerned Stakeholders’ meeting in Maiduguri, said that terrorists were in full control of the Guzamala Local Government Area of the state.

The lawmaker further stressed that the entire Guzamala Local Government area where he hailed from, is still under the control of the Boko Haram sect as there is no existence of civil life in the area.

“There is no single existence of civil life in Guzamala, not to even talk of Military presence in the Council Headquarter and its surrounding communities. All the area is dominated by armed Boko Haram Fighters,” Lawan said.

He also added that he has been agitating for military presence in Guzamala to enable his displaced people take advantage of Gov. Babagana Zulum’s move in reconstruction and resettlement, but to no avail, as Guzamala is still a ‘no go area’.

“We have a total of 774 Local Government areas in Nigeria, we in Guzamala Council want the Federal Government to tell us whether Guzalama has been cancelled out of the 774 so that we can know our position and look for the option,” Lawan said.