Biden To Sanders: ‘Together We Will Beat Donald Trump’ 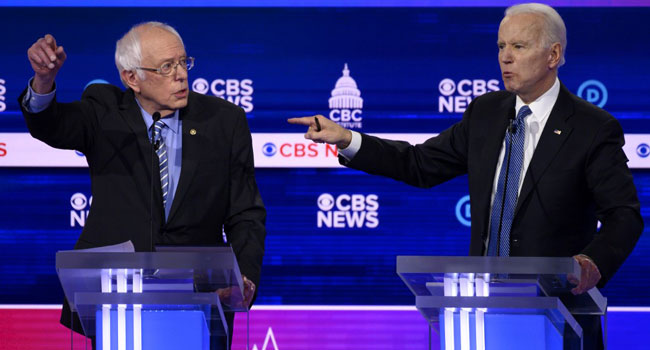 Democratic presidential hopeful Joe Biden reached out to rival Bernie Sanders on Tuesday to say they could work together to beat President Donald Trump in the November election.

“I want to thank Bernie Sanders and his supporters for their tireless energy and their passion,” he said.

“Together we’ll defeat Donald Trump… We’ll bring this nation together.”

“Tonight we’re a step closer to restoring decency, dignity, and honor to the White House. That’s our ultimate goal,” Biden said to cheering supporters in Philadelphia, his wife Jill Biden at his side.

In a state that Sanders won four years ago against Hillary Clinton, early tallies suggested that political moderate Biden defeated the leftist senator by a margin of more than 10 percentage points.

It was the former vice president’s third projected victory of the night, after Mississippi and Missouri, significantly widening his lead in the battle for delegates to the July Democratic National Convention that will decide the party’s challenger to Trump.

Before Tuesday Biden had racked up 670 delegates in earlier primaries, compared to Sanders’s 574.

With more than half the total 57 primary contests still in front of them, a candidate needs to top 1,991 delegates to capture the nomination.

Sanders’s staff pointed out that neither candidate was even halfway to that goal and vowed to fight on.

“More than half of the states in the country have not even voted yet. Nah, it’s not over,” said Nina Turner, the national co-chair of the Sanders campaign.