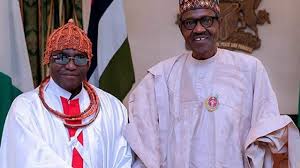 The palace of the Oba of Benin Uku Akpolokpolo has distanced itself from a trending video where some members of Benin kingdom insulted Nigeria President Muhammadu Buhari.

Secretary to the Traditional Council of Benin Frank Irabo in a statement said the contents were not commissioned nor approved by the Benin monarch Oba Akpolokpolo.

The Benin Kingdom assured president Buhari of its support and urged members of the public to disregard the statements uttered in the viral video.

Last week, one Eranornigho and other people who claimed to be representatives of the palace of Oba of Beinn in a video accused Buhari of interfering with politics in Edo State.

In the video, they made abusive statements at the president which they claim were approved by the monarch.

But Irabor said the “utterances and behaviour or Eranornigho and his cohorts show that they are not happy and comfortable with the relationship between the Palace of the Oba of Benin and the Presidency.”

He described the utterances in the video as fake news which expresses a “disaffection, and misrepresentation for their own selfish and mischievous intentions.”

The Benin Traditional Council demanded “an unreserved apology from Eranomigho in other to avert the consequences” an ancestral curse on anyone who attempts to tarnish the image of the Oba of Benin.

Irabor warned that all attempts to bring the Palace of the Oba of Benin into disrepute shall be met within the parameters of the laws of the Federal Republic of Nigeria and the traditional processes of the Benin Kingdom.