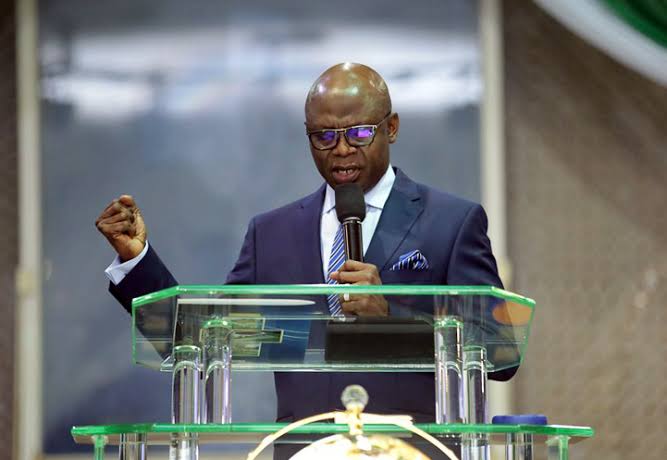 Bakare in an illuminating speech on the state of the nation to mark the beginning of a new decade said the true enemies are found in every level of government, from the local to the state to the federal levels, and in every arm of government in Nigeria.

“Fellow Nigerians, the true enemies of our nation are found at every level of government, from the local to the state to the federal levels, and in every arm of government. They can also be found on the streets, in households and in the marketplace. The true enemies of Nigeria are those who, paraphrasing the words of George Washington, seek to build their greatness upon their country’s ruin. John Addison had earlier foreshadowed this sentiment when he asked the vital question: “Is there not some chosen curse, some hidden thunder in the stores of heaven, red with uncommon wrath, to blast the man who owes his greatness to his country’s ruin?”

“As it is with the leadership, so it is with the citizenry. Leaders and citizens have their citizenship in common; they are drawn from among us and are a reflection of our basest instincts or our highest ideals at every level of government. In Nigeria, the vast majority of our people regularly take turns perpetuating the cycle of corruption either as beneficiaries or benefactors. These enemies in citizens’ clothing are those who choose to be spectators while the nation goes down the drain on their watch; those perverts on the pulpit who hide under togas of godliness to manipulate the vulnerable; those economic behemoths who window dress their underhandedness with filthlanthropy; those who are perpetually “not on seat” because they can’t “come and go and die;” those who rob, rape, raze, pillage, abduct, murder, dismember in the name of hunger or misguided rage; those who sell their votes or connive with political bandits to short-change their children’s children; those who partake of loot and celebrate looters from the same ethnic group or religious organisation; those who say of the looters, “We know say na thief, but this thief na our thief.” These are the true enemies of Nigeria.

“At the local level of government, the true enemies of our nation are those agents of oppression who place excruciating multiple tax burdens on often defenceless Nigerians – the petty traders, okada riders, keke drivers, bricklayers, pepper grinders, carpenters, vulcanisers, mechanics and other artisans – not because they want to amass the proceeds for the benefit of the people, but because they must make remittances to their morally bankrupt political benefactors. These are the true enemies of Nigeria.

These enemies in citizens’ clothing are those who choose to be spectators while the nation goes down the drain on their watch; those perverts on the pulpit who hide under togas of godliness to manipulate the vulnerable; those economic behemoths who window dress their underhandedness with filthlanthropy; those who are perpetually “not on seat” because they can’t “come and go and die;” those who rob, rape, raze, pillage, abduct, murder, dismember in the name of hunger or misguided rage; those who sell their votes or connive with political bandits to short-change their children’s children; those who partake of loot and celebrate looters from the same ethnic group or religious organisation

“At the state level, the true enemies of Nigeria are those state governments that feed fat on unaccounted-for security votes; those who deploy the paraphernalia of office in their selfish interests rather than in the service of the people; those who connive with zonal political oligarchs to personalise and privatise the state; those who deploy the force of state to quell dissent; those who paralyse local governance structures in such a manner that discredits genuine arguments for restructuring and devolution of powers; those who give critics an excuse to postulate that if state governments are already abusing the little power they currently wield, what will they do if we devolve yet more powers to them? These power-drunk state officials are the true enemies of Nigeria.
17/25

“At the zonal level, the enemies of Nigeria are those who have perverted their influence and turned the states within their zones of influence into personal estates. They are the political puppeteers who rig the system to enthrone their stooges and use them to corner resources and opportunities. They are the political bandits and pseudo- democrats who are maniacal in merchandising the will of the people, from masterminding vote-buying to engineering seemingly spontaneous outbreaks of political violence. These are the true enemies of Nigeria.

“At the federal level, the true enemies of Nigeria are in every arm of government. In the judiciary, they are judges who pervert justice and auction judgements to the highest bidder.

In the legislature, they are those legislators who rob the nation “under the guise of constituency projects” and are quick to pass laws that undermine our national freedoms, thereby threatening our national stability. In the executive arm of government, the enemies of our nation are those who deploy the machinery of state against hapless citizens; those who serve self rather than the people; adversaries clad as advisers who could inadvertently destroy the legacy of any president through fabricated facts and contrived counsel in a bid to protect their political careers.

“These are the true enemies that we must stand up against, not the angry young fellow who throws salvos at Mr President hoping to get a few retweets, not the journalist who stares the government squarely in the face, and certainly not the dissenting voice in the midst of sycophants”.

Bakare urged Nigerians in this new decade to stand up against the true enemies highlighted in his statement at all levels rather than attack journalists who criticise the government or youths who use the social media as a tool of mobilisation.

Today’s State of the Nation Broadcast is aimed at unveiling the true enemies of Nigeria. Please lend me your ears as we separate chaff from grains, tares from wheat, villains from heroes, and perverts from patriots. Turn your Bibles with me, if you will, to Isaiah 5:20-24 (NKJV), a text of Scripture that, in my opinion, captures today’s theme, “Unveiling the True Enemies of Nigeria,” in its entirety:

Woe to those who call evil good, and good evil; Who put darkness for light, and light for darkness; Who put bitter for sweet, and sweet for bitter!
Woe to those who are wise in their own eyes, And prudent in their own sight!
Woe to men mighty at drinking wine, Woe to men valiant for mixing intoxicating drink,
Who justify the wicked for a bribe, And take away justice from the righteous man!
Therefore, as the fire devours the stubble, And the flame consumes the chaff, So their root will be as rottenness, And their blossom will ascend like dust;
Because they have rejected the law of the LORD of hosts, And despised the word of the Holy One of Israel.

Fellow Nigerians, I welcome you to a new decade in the 21st century. About a hundred years ago, our founding fathers began the quest to build a great nation. The 1920s ushered in the decade of Nigerian nationalism when, for the first time, Nigerians began to embrace the possibilities of nationhood. The frameworks of the Nigerian state had been laid with the amalgamation of the Northern and Southern Protectorates in 1914. However, six years post-amalgamation, our forebears still regarded themselves not as Nigerians but as Edos, Ijaws, Igbos, Kanuris, Hausas, Yorubas, and so on. They still viewed themselves as diverse local tribes under the rule of colonial masters. However, a shift began in the 1920s as the policies of the colonial masters brought economic and social hardships upon the people.i Under the leadership of patriotic founding fathers, the Nigerian people began to craft a sense of national identity.

In 1923, one hundred years apart from 2023, our next election year, the first Nigerian political party, Nigerian National Democratic Party (NNDP), was established by an illustrious son of a priest, Olayinka Herbert Macaulay. For those who may not be aware, Herbert Macaulay was the grandson of Bishop Samuel Ajayi Crowther, an Anglican bishop from Osoogun (in today’s Oyo State) who translated the Bible into Yoruba. Herbert Macaulay took the first steps towards forging a nation in which Nigerians, no matter the part of the country they hailed from, and no matter their tribe or religion, would identify themselves first as Nigerians.

By so doing, Herbert Macaulay became the first of the founding fathers of the would-be Nigerian nation. Spurred by the movement pioneered by this man, a coalition of Nigerians from across the nation came together within one decade to begin the cause of wresting the soul of Nigeria from the stranglehold of colonialism on the path to forging a new nation. Following the leadership of Macaulay, one source states:

The forces unleashed against the British were now diverse, including soldiers who had served in World War II, the media, restless youth, market women, educated people, and farmers, all of whom became committed to the anticolonial movement. Political leaders resorted to the use of political parties and the media to mobilize millions of Nigerians against the continuation of British rule.ii

In the course of traversing the nation and mobilising Nigerians under the aegis of the National Council of Nigeria and the Cameroons (NCNC), Herbert Macaulay fell ill in Kano and later died in Lagos but not without passing the torch to coming generations of patriots. Notably, the creation of the NCNC in 1944 was a joint effort between the then eighty-year-old Macaulay and the forty-year-old Nnamdi Azikiwe who would go on to become Nigeria’s first president in an independent Nigeria Macaulay did not live to see.iii

Where Herbert Macaulay stopped, the likes of Nnamdi Azikiwe, H.O. Davies, Ernest Okoli, Margaret Ekpo, Eyo Ita, Obafemi Awolowo, Ahmadu Bello, Tafawa Balewa and Funmilayo Ransome- Kuti picked up the mantle. But our founding leaders were subject to like passions just as we are, and they had their moments of doubt. From the young Tafawa Balewa who dismissed the concept of Nigerian unity as “only a British intention,”iv to the equally young Obafemi Awolowo who described Nigeria as “a mere geographical expression,”v our founding fathers were initially far from convinced about the prospects of nationhood. However, at some point in their respective trajectories, our founders encountered the possibilities of Nigerian nationhood. In those defining moments, they embraced the promptings of destiny and it came into their hearts to build a nation.