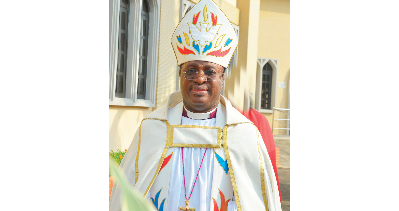 The Rt. Rev. Dr. Humphrey Bamisebi Olumakaiye was born on 28 January, 1969. He got admitted into Immanuel College of Theology, Ibadan in 1988, where he obtained a Diploma in Religious Studies and Diploma in Theology in 1991 with distinctions. Between 1991 and 1993, he obtained his first degree in Religious studies from the University of Ibadan.

He also got his Master’s degree in Religious studies and Doctor of Philosophy (Ph.D) from the University of Ibadan. The Rt. Rev. Dr. Humphrey B. Olumakaiye was elected Bishop (9 years ago) on May 22, 2009, consecrated on Sunday, July 12, 2009, and enthroned on July 16, 2009, as the first Bishop of Osun North East Diocese.

Bishop Olumakaiye is an excellent scholar and sapient preacher of God’s Word. He is an Evangelist and a Revivalist, very charismatic, dynamic and resourceful. He is a Bishop with a shepherd heart, and a man with a ‘Midas Touch’. He is an astute and unassuming Administrator with an exceptional endowment of transforming array of ideas into reality. He is a builder, who has built several structures in what culminated into an Anglican Village in Otan-Ayegbaju, Osun State.

He has, to his credit, a number of internationally accepted Theological books published by him. They include :

Anglican Women; Positions, Privileges and Prospects of Women in the ChurchInculturation and Decolonization of Oral and Liturgical Theology of the Anglican Communion, Nigeria.

Humphrey Olumakaiye was the Youth Chaplain for more than a decade in Ilesa Diocese before he was appointed the Youth Work Board Chairman. He is a great lover of youths.

He is currently the Secretary of the Supra West Board, Church of Nigeria,The Secretary of the Proprietors’ Desk of Ajayi Crowther University, Oyo,Member of the Board of Trustees of Pension and Gratuity of the Supra West Board,Member of the Governing Council of Ajayi Crowther University, Oyo,Coordinator, Prayer Convocation of Ibadan Ecclesiastical Province,Coordinator, GAFCON 2018, Ibadan Ecclesiastical Province, Chairman, 60th Anniversary of Immanuel College of Theology, Ibadan

The Rt. Rev. Olumakaiye was an Annual Guest Lecturer at St Luke’s Central Church, Birmingham, UK (2011-2015). He also attended the World Mission Conference in Derbyshire and University of Birmingham. In 2005, he and his wife attended a short programme on Church Music and Pastoral Care in Melbourne, London.

A Televangelist, Motunrayo Funke Olumakaiye now anchors the popular Television programmme “Women of Excellence” in ACNN and OSBC. She is very committed to Women’s and Girls’ work with unprecedented achievements to her credit. She was the immediate past Coordinator of the Church of Nigeria, Action and Outreach unit of the Mothers’ Union (2011-2017). She was the Editor-in-Chief of ‘Women of Value’, an Annual Publication of the Church of Nigeria Women’s Organization for six years. She is a woman of substance and a goal-getter with an impeccable character.