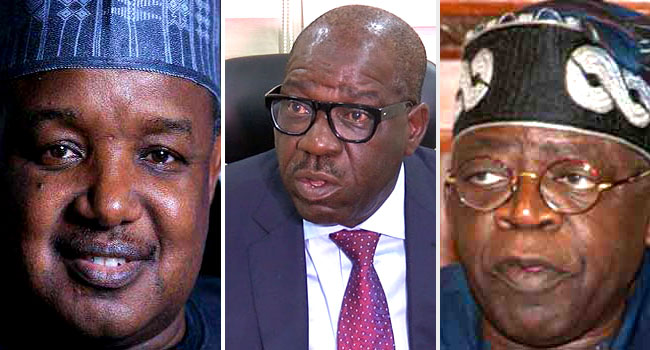 Some governors elected on the platform of the All Progressives Congress (APC) have met with the party’s National Leader, Senator Bola Tinubu.

This comes as part of efforts to douse the crisis in the Edo State chapter of the party ahead of the forthcoming governorship election in the state.

The APC in Edo had been split since the disagreement arising from the absence of some lawmakers at the inauguration of the State House of Assembly, with a group loyal to the APC National Chairman, Mr Adams Oshiomhole, and the other led by the incumbent governor, Mr Godwin Obaseki.

In a bid to resolve the dispute between the two groups, the Chairman of the Progressives Governors’ Forum, Atiku Bagudu (Kebbi State), led Governor Obaseki and six other governors to seek Tinubu’s intervention in the matter.

Channels Television gathered that as part of the steps towards resolving the dispute, the governors proposed that the APC lawmakers in Edo State who were not inaugurated alongside their colleagues be sworn in.

Meanwhile, another crisis may be brewing in the party following the disagreement over the mode of primary to be conducted to choose the party’s flagbearer for the governorship election.

While the National Working Committee of the party had approved the direct primary process, the camp loyal to the governor preferred the indirect primary.

The position of the latter was supported by the Chairmen of all the local government areas in Edo State.