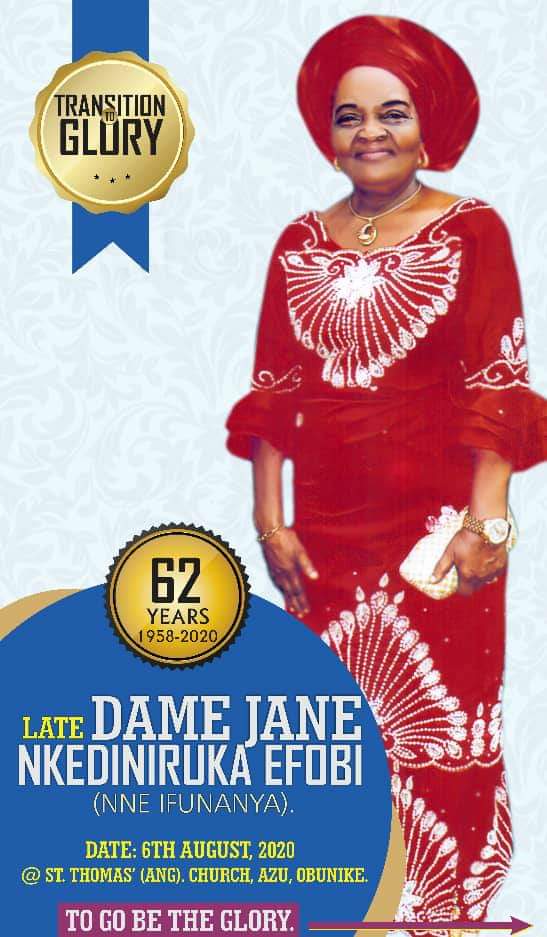 By The Venerable Princewill Ireoba

A retired Archbishop of the Niger Province, Bishop of Diocese of Aguata and Dean of the Church of Nigeria (Anglican Communion), the Most Rev. Christian Efobi has reminded the living that this life is transient and ephemeral. The Archbishop, who was speaking during the burial service of his late wife, Dame Jane N. Efobi, on August 6, at St Thomas Anglican Church, Azu-Ogbunike, Anambra State, expressed a huge sense of loss for the sudden departure of his wife who had been his companion and support all through his ministry.

He was, however, grateful to God for answering their prayer of not separating them during their active service. He said that his wife died peacefully with the assurance of eternal rest and that all should prepare for death since all must die in due time. 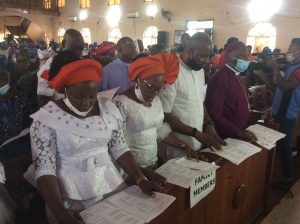 The Primate of the Church of Nigeria, the Most Rev. Henry Ndukuba, together with his wife, Mrs Angela Ndukuba, who spoke in the service through the Archbishop of the Province of Niger, the Most Rev. Dr Alex. Ibezim, urged the bereaved Efobi not to sorrow as those without hope. The Primate and wife reminisced how they all worked together in the North with the deceased and her husband, and how supportive she had been to his life and ministry and assured him of their prayers.

The Bishop of Afikpo Diocese, the Rt Rev. Paul Udogu, who preached in the service proclaimed that Jesus Christ has been revealed as the only way to salvation. Noting that the burial day corresponded with the commemoration of the Transfiguration of Our Lord (6th August), said that God Himself spoke both at his Baptism and Transfiguration that Jesus is his Only Son that should be followed.  He regretted that many have deviated and rather followed their own devised ways of salvation.

He warned those who corrupt and unduly manipulate church ministries to attract people to selves, rather than Jesus to desist from such acts. The preacher called on Christians to come back to Jesus and hear him as the only way to be truly saved, both for eternal life and the troubles of the present world, is by hearing and obeying Jesus.

The preacher, who had served in the North with late Dame Efobi, said that her life and ministry was a reflection of what it meant to follow Jesus. She was heavenly conscious and served God sacrificially.

She married a missionary serving in the North, which was not lucrative and became the backbone to the ministry of her husband as they traversed the villages in Northern Nigeria. She later became a beacon to women ministry in the Dioceses of Yola and Aguata (where they eventually became bishop), a counsellor and motivator.

In a tribute to the departed Dame Jane, the Rector of the Ibru Centre, Agbarha-otor, the Ven. Dr Princewill Ireoba wrote that she was very lively, friendly, frank, guileless, wise, contented, generous, motherly, unassuming, honourable and godly and that all who came across her and appreciated her frankness, would surely and greatly miss her.