All Lives Should Matter Equally 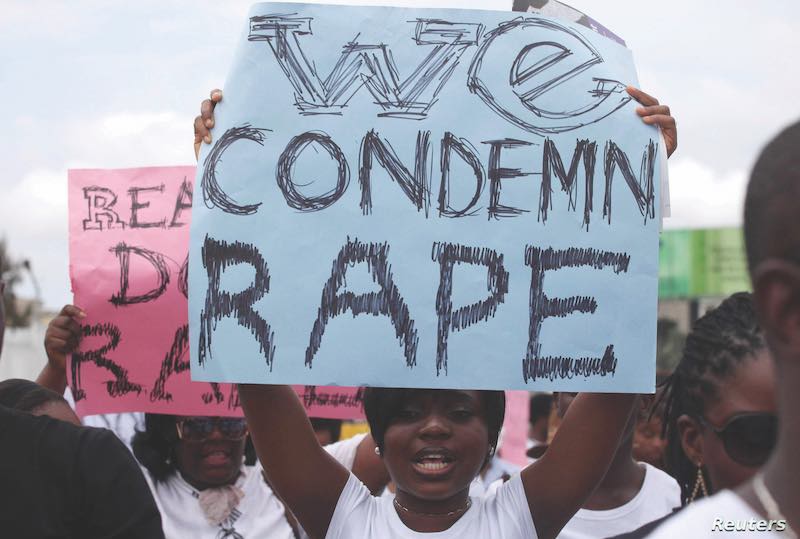 I am sure that we are all in agreement that the world has become an extremely violent place, whether the violence is perpetrated by ordinary citizens or by law enforcement agents, whether it is as a result of racism, tribalism, intolerance, depravity, pure crime, some other reasons or no explicable reason at all.

Rape
About two weeks ago, beautiful 22 year old Microbiology student of University of Benin, Uwaila Omozuwa was brutally raped and left unconscious lying in a pool of her own blood, where she had gone to study in a Redeemed Christian Church of God Parish in Benin City, as schools remain closed as a result of the Covid-19 Pandemic. She succumbed to her injuries, and died in hospital a few days later. I seize this opportunity to express my deepest condolences to the family of Uwaila, and I pray for the repose of her soul. A suspect linked to this dastardly crime of rape and murder has been arrested, and I pray that the perpetrator and his cohorts, if he had any, are prosecuted to the fullest extent of the law, as they, deserve nothing less.

Murder and Rape in the Southern States of Nigeria are provided for by the Sections 316, 317, 319, 325, 357 and 358 of the Criminal Code Act, in the Northern States, Sections 220 – 226, 282-283 of the Penal Code Act, and Sections 1 and 2 of the Violence Against Persons Prohibition Act 2015, applicable in Abuja, the Federal Capital Territory. The punishment for rape is life imprisonment, while that of murder could be the death penalty.

I believe that I’m becoming a proponent of chemical castration, for rapists and paedophiles. I cannot get over the shock of the recent rape of two 12 year old girls, one in Dutse, Jigawa State who had been raped repeatedly by 11 men, and another in Ajah, Lagos, who was raped by four masked men. See the case of Isa v State (2016) 6 NWLR (Pt.1508) 243 per Ibrahim Tanko Muhammad, J.S.C (now CJN):

“A rapist is worse than an animal. He has no moral rectitude. He throws overboard, the limit of his legal right and he can, shamelessly, deprive another person (more painfully, female children of under age) of their God given rights of protecting the chastity and sanctity of their body and mind. He is all out to pollute such chastity and sanctity. He has no respect for human beings! He can commit any atrocity. He is a cancer in the society. What a shame!” I concur with his Lordship. Truly, a rapist is worse than an animal, especially one that rapes children. It is simply unthinkable, inconceivable – beyond belief.

“I can’t breathe”
Recently, former Police Officer, Derek Chauvin, killed George Floyd in Minneapolis, Minnesota while purportedly effecting his arrest. In the “I can’t breathe” video which went viral worldwide, Chauvin was seen kneeling on the neck of 46 year old Mr Floyd for 8 minutes 46 seconds, and despite the fact that the deceased was heard pleading for his life and begging that he couldn’t breathe, even when Mr Floyd became unresponsive, Chauvin continued to maintain that position on his neck for a few minutes. Naturally, this nasty incident resulted in the death of Mr Floyd.

To get things in a better perspective, let’s look at what got Mr Floyd into trouble in the first place. He was suspected of using a counterfeit $20 bill to buy cigarettes in a store, a non-violent gross misdemeanour which carries a maximum penalty of 1 year imprisonment and $3,000 fine, if the amount involved is less than $1,000 (and Mr Floyd’s was $20) – (Section 609.632(3), punishable by 609.632(4) Minnesota Statutes).

My first submission is that, undoubtedly, Chauvin used a sledgehammer to kill an ant, and that if America is truly serious about trying to stem what seems to be the ever-rising ugly tide of racism, Chauvin and his colleagues must be given the maximum penalty for the crimes they committed, to serve as a deterrent to racist Police Officers in America and indeed, all racists, that it’s no longer business as usual – whether white, black or green, if you use excessive force against people on account of their race or colour, the appropriate punishment will be meted out to you – no more slaps on the wrists.

Degrees of Murder
Only three States in USA – Florida, Pennsylvania and Minnesota, have provision for the crime of 3rd degree Murder, which initially was the main crime that Chauvin was being charged for.
1st degree Murder is – you planned the killing, you wanted your plan to result in death, you executed your plan and killed the deceased (mens rea and actus reus); it is punishable with life imprisonment (with or without the option of parole) and in some States, the death penalty.

The lesser offence of 2nd degree Murder, is that the Defendant intended to kill the deceased, but didn’t plan it – that is, it was not premeditated; this is punishable with imprisonment of up to 40 years.
3rd degree Murder is Depraved Heart Murder – the unlawful killing of a human being, perpetrated without the intent to kill the deceased by perpetrating an act “eminently dangerous to others and evincing a depraved mind, without regard for human life”. In the State of Minnesota, the sentence cannot exceed 25 years imprisonment or a fine of $40,000 or both, though about 12 years and 4 years imprisonment are the recommended punishments for 3rd degree Murder and 2nd degree Manslaughter respectively.

Let me state categorically that, I was happy that the charge against Chauvin was upgraded to 2nd degree Murder, as I certainly did not agree that the charge applicable to his crime could be regarded as simply one of a depraved heart that didn’t have the intention to kill! Indeed, Chauvin certainly had a depraved heart, and even if he didn’t leave home with the intent to kill Mr Floyd that morning, he certainly developed the intent at some point during the arrest. We all know that, every individual on this earth needs to breathe to stay alive. Therefore, a person who does something that disrupts another’s breathing process, and knowingly continues to do so when he becomes aware of that fact, obviously and definitely intends to snuff the life out of the victim.

I submit that, Chauvin did have the requisite legal intent to murder Mr Floyd. If he didn’t, he wouldn’t have stayed on Mr Floyd’s neck for the length of time he did, nor would he have ignored Mr Floyd’s pleas about being unable to breathe. I further submit that, there is enough evidence for the Prosecution to discharge the burden of proof that, Chauvin intentionally killed Mr Floyd without premeditation, that is, 2nd degree Murder.

State v Mohamed Noor
The case of Chauvin can easily be distinguished from that of 27-CR-18-6859 State v Mohamed Noor, a case in which Noor, a Somalian American Police Officer was found guilty of the 2017 3rd degree Murder of Ms Justine Ruszczyk (Caucasian) and 2nd degree Manslaughter, contrary to Minnesota Statute: 609.205(1) reference to 609.205.11.5(a). Both offences carry a minimum sentence of 3 years imprisonment, but Noor was sentenced to the recommended 12.5 years imprisonment.
In that case, Noor had fired a shot from his gun, killing the deceased who had called for Police assistance on hearing some noises in the alleyway behind her residence. It was dark, and Noor and his partner had heard some noises which “spooked” them. In a bid to protect his partner and himself, Noor fired the shot which killed Ms Ruszczyk who had exited her residence into the alleyway.

Some have argued that, if Noor had been Caucasian and Ms Ruszczyk African-American, he would probably not have been found guilty. The Statement of Probable Cause of Noor’s actions, at best, evinced the fact that Noor may have been reckless for firing his gun on the suspicion of a threat, without properly ascertaining what he was firing at, because it was dark. Noor certainly perpetrated an act eminently dangerous without regard for human life, but it cannot really be concluded that he had the intent to kill, like Chauvin.

Sincerely, I do not believe that Noor and Chauvin’s actions can be equated and be considered to be the same type of offence, nor can they be seen in the same light, as the latter, whose actions were deliberate, cruel and showed a total lack of regard for human life, had been in the Minneapolis Police for 18 years. Noor, on the other hand, was an inexperienced ‘rookie’ Police Officer, who seemed to have acted recklessly in panic. This is not to say that Noor is absolved of culpability, as a precious life was lost, nonetheless. Noor should have exercised, a higher duty of care.

Chauvin’s Colleagues
As for Chauvin’s colleagues who were present at the scene – Tou Thao, Alexander Kueng and Thomas Lane, mere dismissal from the Police is inadequate. Thankfully, they have been charged for aiding and abetting 2nd degree Murder and 2nd degree Manslaughter, carrying sentences of 40 years and 10 years respectively, on conviction. Keung and Lane had held Mr Floyd’s back and legs, while Thao watched his colleagues subduing him. Police Officers are people in a special position, with a statutory duty to render aid to those in distress (whether they are accused persons or not, they are innocent until proven guilty; and even if they are found guilty, all offences have their prescribed punishments), and not to stand by assisting or doing nothing, while excessive force is used to kill suspects.

This could very well be a watershed in the history of racism, if the American judicial system and the society at large, do the right thing. Hatred and intolerance, are harmful. Juries, in handing down their decisions, have mostly always shown that Caucasian lives matter more; it is time to show that, African-American lives matter just as much, as indeed, the lives of all the different races.

Qiote
“JURIES, IN HANDING DOWN THEIR DECISIONS, HAVE MOSTLY ALWAYS SHOWN THAT CAUCASIAN LIVES MATTER MORE; IT IS TIME TO SHOW THAT, AFRICAN-AMERICAN LIVES MATTER JUST AS MUCH, AS INDEED, THE LIVES OF ALL THE DIFFERENT RACES”