Afghan president vows to speed up release of Taliban prisoners 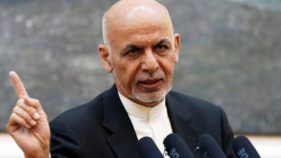 Afghan President Ashraf Ghani vowed Sunday to speed up the release of Taliban prisoners after welcoming a surprise offer by the insurgents of a three-day ceasefire during the Eid holiday.

“As a responsible government we take one more step forward — I announce that I will expedite the Taliban prisoner releases,” Ghani said in an address to the nation marking Eid al-Fitr.

He also urged the militants to press on with the release of the Afghan security personnel they hold.

A US-Taliban deal signed in February stipulated that the Afghan government would release up to 5,000 Taliban prisoners while the insurgents would free about 1,000 Afghan security force personnel.

The prisoner swap is seen as a confidence-building move ahead of long-awaited peace talks between the government and Taliban.

Kabul has so far released about 1,000 Taliban inmates while the insurgents have freed about 300 Afghan security force personnel.

The Eid al-Fitr holiday marks the end of the Muslim holy fasting month of Ramadan.

Since the US invasion of Afghanistan in 2001 there has only been one other pause in the fighting — a three-day ceasefire between the Taliban and Kabul, also marking the end of Eid in 2018.

That ceasefire was initiated by Ghani.