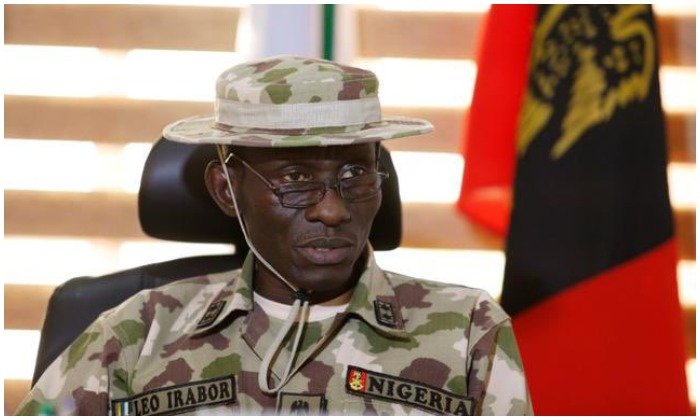 The meeting was convened with a view to tactically easing out no fewer than 70 major generals, AVMs and rear admirals out of the service.

The President, Muhammadu Buhari, had skipped 29 major-generals and appointed Yahaya who is a member of Regular Course 37, a move which has been generating controversy in the last two weeks.

Irabor subsequently asked members of Course 36 to proceed on courses of their choice and to no longer report at their duty posts.

The Thursday meeting was sequel to a letter marked DH/ABJ/401/38/ADM dated June 4, 2021 which was marked ‘restricted’ but was obtained by our correspondent.

The letter was signed by Rear Admiral AB Adamu on behalf of the CDS.

It read in part, “Ref A (NOTAL) under the cover of Ref B (NOTAL) approved the commencement of annual leave in respect of Maj Gen JB Olawunmi (N/8795) and 28 others who are members of 36RC in the NA. The snr offrs (senior officers) were to proceed on the annual leave wef 1-30 June. However, I am directed to invite all serving members of 36 RC in the AFN (Maj Gen and equivalent) to a meeting with the CDS as follows. Thursday, June 10, 21; DHQ Conference Hall; 11.00hrs prompt.”

It was learnt that Irabor, based on approval from the Federal Ministry of Defence, asked all the members of regular course 36 across the three services to proceed on courses of their choice for the next one year.

A general, who spoke to our correspondent on the condition of anonymity, said, “Gen Irabor made it clear to everyone that because all course 36 members of the army who are seniors of the current Chief of Army Staff, are being eased out, it would be wrong to retain their course mates in other services.

“To this end, all air vice marshals in the air force and all rear admirals in the navy that are members of Course 36 have been affected. They will not be allowed to continue to report at their respective services or at DHQ. The intention is to get all to resign without forcing them to do so.”

When asked why the military was taking the action, the general added, “The military now has a tradition whereby when a new chief of any of the branches is appointed, all those who senior him, including those who are in other arms of the military, are eased. This was how members of the Regular Course 35 were all eased out in February.”