150 Suspects Arrested In Connection With Unrest In Ogun Communities 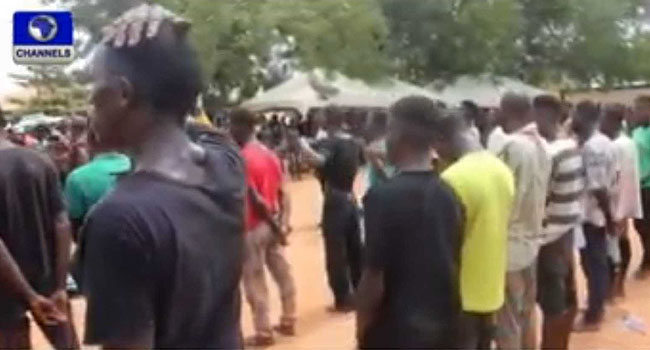 The police in Ogun State have arrested 150 suspected members of a cult group who have been causing unrest in some parts of the state and Lagos State.

The State Commissioner of Police, Kenneth Ebrimson, while parading the suspects at the Ifo divisional headquarter of the state police command on Sunday said the police would not fold its arms and watch hoodlums perpetrate evil.

He assured residents of adequate security of life and property and warned against jungle justice.

“The police is the lead agency in internal security. The police are saddled with the responsibility of protecting lives and properties and we will do just that.

“We have resolved to bring out all that we have in our arsenal to destroy these criminals in Ogun State,” Ebrimson said while parading the suspects.

The arrested suspects are mainly youths between the age of 20 and 30 years and are allegedly linked to crimes in areas like Ifo, Agbado-Ijaiye, Sango, Ijoko axis of the state.

Items recovered from them include locally made guns, 52 cartridges, axes, gas cylinder among other dangerous weapons.